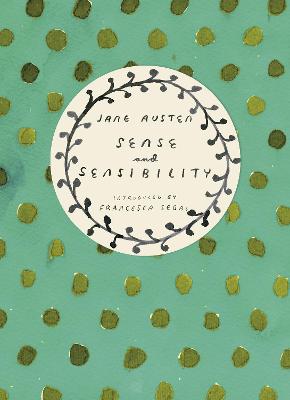 Part of the Vintage Classics Austen Series- all six of Jane Austen's major novels, beautifully designed by writer and illustrator Leanne Shapton and introduced by our finest contemporary writers

Elinor is as prudent as her sister Marianne is impetuous. Each must learn from the other after they are they are forced by their father's death to leave their home and enter into the contests of polite society. The charms of unsuitable men and the schemes of rival ladies mean that their paths to success are thwart with disappointment but together they attempt to find a way to happiness.

WITH AN INTRODUCTION BY FRANCESCA SEGAL

» Have you read this book? We'd like to know what you think about it - write a review about Sense and Sensibility (Vintage Classics Austen Series) book by Jane Austen and you'll earn 50c in Boomerang Bucks loyalty dollars (you must be a Boomerang Books Account Holder - it's free to sign up and there are great benefits!)

Jane Austen was born in Steventon rectory on 16 December 1775. Her family later moved to Bath, then to Southampton and finally to Chawton in Hampshire. She began writing Pride and Prejudice when she was twenty-two years old. It was originally called First Impressions and was initially rejected by the publishers and only published in 1813 after much revision. She published four of her novels in her lifetime, Sense and Sensibility (1811), Pride and Prejudice (1813), Mansfield Park (1814) and Emma(1816). Jane Austen died on 18th July 1817. Northanger Abbey and Persuasion were both published posthumously in 1818. Francesca Segal is a journalist and writer. Her debut novel, The Innocents, was awarded the 2012 Costa First Novel Award among many other prizes. Leanne Shapton is an illustrator, author and publisher based in New York City. http-//leanneshapton.com/