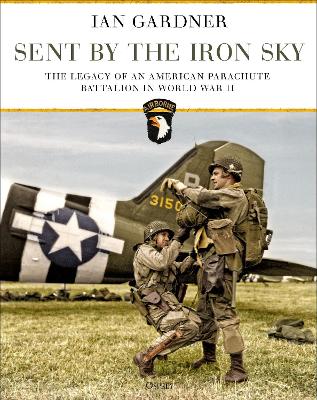 Sent by the Iron Sky: The Legacy of an American Parachute Battalion in World War II

Description - Sent by the Iron Sky: The Legacy of an American Parachute Battalion in World War II by Ian Gardner

Following on from the success of Ian Gardner's critically acclaimed trilogy on the exploits of the 3rd Battalion, 506th Parachute Infantry Regiment, 101st Airborne Division in World War II, Sent by the Iron Sky tells their exhilarating story for a new readership. From the moment they entered the war in June, 1944, the men of 3rd Battalion were faced with brutal fighting against horrendous odds. Later in the year, nearly five months in combat with no relief lead to heavy losses that reduced them to the size of a company. Their heroic defence of Bastogne saw their division awarded a Unit Citation, a first in the history of the US armed forces, and they subsequently fought on across Europe, finishing the war occupying Hitler's mountain retreat of Berchtesgaden.
Drawing on years of research and interviews with veterans of some of the toughest battles of World War II, together with maps and over 200 vintage images, Ian Gardner brings to life some of the most bitter fighting of the war in Europe, laying bare the horrors of war, the deprivations of day-to-day living and the chaos of the front line. Additional material includes a chapter on the fate of the men captured in Normandy and a foreword by Lee Wolverton, the grandson of the commander of 3rd Battalion, Col Robert Wolverton.

Book Reviews - Sent by the Iron Sky: The Legacy of an American Parachute Battalion in World War II by Ian Gardner

» Have you read this book? We'd like to know what you think about it - write a review about Sent by the Iron Sky: The Legacy of an American Parachute Battalion in World War II book by Ian Gardner and you'll earn 50c in Boomerang Bucks loyalty dollars (you must be a Boomerang Books Account Holder - it's free to sign up and there are great benefits!)


A Preview for this title is currently not available.
More Books By Ian Gardner
View All