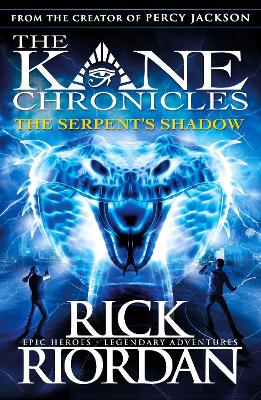 CARTER AND SADIE KANE, descendants of the magical House of Life, are in pretty big trouble.

Despite their bravest efforts, Apophis, the giant snake of Chaos, is still threatening to plunge the world into eternal darkness. Now the Kanes must do something no magician has ever managed - defeat Apophis himself. No pressure there then.

Battling against the forces of Chaos, their only hope is an ancient spell - but the magic has been lost for a millennia. Will they find the serpent's shadow, or will they be led to their deaths in the depths of the Underworld? » Have you read this book? We'd like to know what you think about it - write a review about Serpent's Shadow (The Kane Chronicles Book 3) book by Rick Riordan and you'll earn 50c in Boomerang Bucks loyalty dollars (you must be a Boomerang Books Account Holder - it's free to sign up and there are great benefits!)