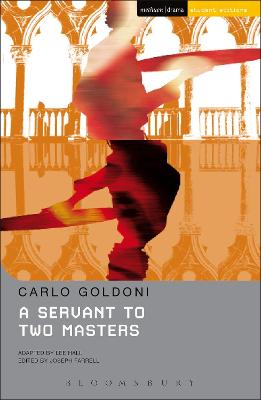 A Servant to Two Masters

Description - A Servant to Two Masters by Joseph Farrell

This Student Edition of Goldoni's classic 18th century play, A Servant to Two Masters, features expert and helpful annotation, ideal for anyone studying or performing the play. Editor Joseph Farrell's accessible Introduction includes a plot synopsis, a commentary on the dramatic, social and political context, and on the themes, characters, language and structure of the play, as well a list of suggested reading, questions for further study and a review of performance history.

The play revolves around the wily, greedy servant Truffaldino, who in trying to fill both his purse and his stomach, attempts to serve two masters simultaneously. Meanwhile, his mistress disguises herself as her dead brother to claim the dowry from his bewildered, bereft fiancee. The plot is full of mishaps and mix-ups, confusions, disguises and mistaken identity, before the murder and entangled romances can be resolved.

Lee Hall's contemporary, faithful version is fast-paced, funny and idiomatic. Updating the comedy for the reader and audience, this version is thoroughly accessible, whilst also portraying the plot's tricks and absurdities with comic flair.

Book Reviews - A Servant to Two Masters by Joseph Farrell

» Have you read this book? We'd like to know what you think about it - write a review about Servant to Two Masters book by Joseph Farrell and you'll earn 50c in Boomerang Bucks loyalty dollars (you must be a Boomerang Books Account Holder - it's free to sign up and there are great benefits!)

Carlo Goldoni (1707-93) was an Italian dramatist born in Venice who wrote over 200 comedies, tragedies and tragicomedies in his lifetime. Adaptor Lee Hall was Writer in Residence at the RSC 1999-2000 under the Pearson Playwrights scheme after his acclaimed play Spoonface Steinberg. He also wrote the screenplay to the film Billy Elliot, receiving an Oscar nomination for Best Original Screenplay. Editor Joseph Farrell is a world-leading expert in Italian drama.