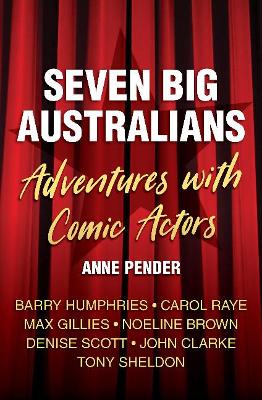 Comic actors have made a particularly strong contribution to cultural life in Australia over the past sixty years. They have brought a range of memorable characters to the stage, television and film; they have transformed our image of ourselves, helped to overturn the crippling cultural cringe, and brought Australian humour and satire to the world. The Australian theatre, television and film industries are dynamic in ways that could never have been imagined fifty years ago. These industries have expanded and demonstrated extraordinary vitality, with actors, as the public face of the performing arts, carrying the immediate responsibility for the success of each show. It is the actors, and often the characters they play, that we remember when we recall a favourite television program, film or play, long after we have seen it. In spite of this they are frequently left out of history.

» Have you read this book? We'd like to know what you think about it - write a review about Seven Big Australians: Adventures with Comic Actors book by Anne Pender and you'll earn 50c in Boomerang Bucks loyalty dollars (you must be a Boomerang Books Account Holder - it's free to sign up and there are great benefits!)


A Preview for this title is currently not available.
More Books By Anne Pender
View All