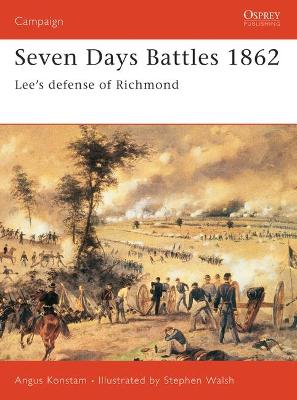 When General Robert E. Lee took command of the Army of Northern Virginia, the Confederacy was in crisis. Lee changed all that in a brilliant, week-long campaign. On 26 June the Confederates struck, fighting two hard-fought battles in two days at Mechanicsville and Gaine's Mill. The ferocity of the Confederate assaults convinced McClellan that he was outnumbered. Unable to keep the Confederates at bay, the Union army was recalled to Washington. Despite losing a quarter of his men, Lee had saved Richmond, and inflicted a humiliating defeat on the Army of the Potomac. This book traces the course of this short yet crucial campaign.

» Have you read this book? We'd like to know what you think about it - write a review about Seven Days Battles book by Angus Konstam and you'll earn 50c in Boomerang Bucks loyalty dollars (you must be a Boomerang Books Account Holder - it's free to sign up and there are great benefits!)

Angus Konstam hails from the Orkney Islands and is the author of over 15 books, many of which are published by Osprey. Formerly the Curator of Weapons in the Royal Armouries at the Tower of London, he also served as the Chief Curator of the Mel Fisher Maritime Museum in Key West, Florida. Angus lives in London, where he combines a freelance museum consultancy business with a career as a historian and writer. Gerry Embleton has been a leading illustrator and researcher of historical costume since the 1970s, and has illustrated and written Osprey titles on a wide range of subjects over more than 20 years. He is an internationally respected authority on 15th and 18th century costumes in particular. He lives in Switzerland, where since 1988 he has also become well known for designing and creating life-size historical figures for museums.