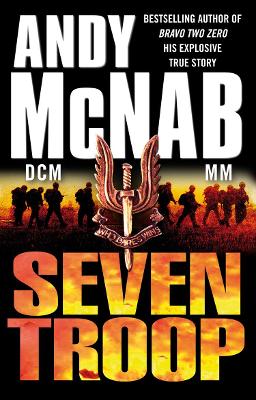 They were like a band of brothers...In 1983 Andy McNab was assigned to B Squadron, one of the four Sabre Squadrons of the SAS, and within it to Air Troop, otherwise known as SEVEN TROOP.This is Andy McNab's gripping account of the time he served in the company of a remarkable group of men - from the day, freshly badged, he joined them in the Malayan jungle, to the day, ten years later, that he handed in his sand-coloured beret and started a new life. The links they forged then bound them inextricably together, but the things they saw and did during that time would take them all to breaking point - and some beyond - in the years that were to follow. He who dares doesn't always win...

» Have you read this book? We'd like to know what you think about it - write a review about Seven Troop book by Andy McNab and you'll earn 50c in Boomerang Bucks loyalty dollars (you must be a Boomerang Books Account Holder - it's free to sign up and there are great benefits!)

Andy McNab joined the infantry as a boy soldier. In 1984 he was 'badged' as a member of 22 SAS Regiment and was involved in both covert and overt special operations worldwide. During the Gulf War he commanded Bravo Two Zero, a patrol that, in the words of his commanding officer, 'will remain in regimental history for ever'. Awarded both the Distinguished Conduct Medal (DCM) and Military Medal (MM) during his military career, McNab was the British Army's most highly decorated serving soldier when he finally left the SAS in February 1993. He wrote about his experiences in two phenomenal bestsellers, Bravo Two Zero, which was filmed starring Sean Bean. Besides his writing work, he lectures to security and intelligence agencies in both the USA and UK. He is also patron of the Help is 4 Heroes campaign.