Sexual practices and drug use among the young are examined in this book, calling into question mainstream assumptions about 'adolescence'.
Bringing together a range of cross-cultural and cross-national contributions, the book reveals both similarities and important differences that mark sexuality and drug use among young in different social and cultural settings. In doing so, it allows the reader to build up a clearer understanding of the challenges that must be faced in public health and education if we are to develop programs and interventions that really serve the needs of young people.

The book will be of interest to professionals working with young people and is suitable for a wide range of multidisciplinary courses covering areas such as human sexuality, sex education, public health and social work.

Other Editions - Sex, Drugs and Young People by Peter Aggleton 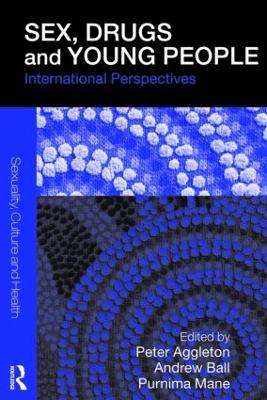 » Have you read this book? We'd like to know what you think about it - write a review about Sex, Drugs and Young People book by Peter Aggleton and you'll earn 50c in Boomerang Bucks loyalty dollars (you must be a Boomerang Books Account Holder - it's free to sign up and there are great benefits!)

Peter Aggleton (PA) is the co-author and/or editor of several books of a similar cross-over nature. They include Young People and Mental Health (for Wiley, 2000) and Nursing Models and the Nursing Practice (for Palgrave, 2000). For Taylor and Francis, he has edited over fifteen specialist books and is the editor of the journal Culture, Health and Sexuality. He is Professor of Education and Director of the Thomas Coram Research Unit at the Institute of Education, University of London and Visiting Professor in the Department of HIV Social Research at the University of New South Wales, Sydney, Australia. He has worked internationally in health promotion for over twenty years and is currently coordinating the evaluation of the Ford Foundation's international 'Global Dialogue for Sexual Health and Well-Being'. Purnima Mane (PM) is currently Chief Portfolio Director at the Global Fund for AIDS, Tuberculosis and Malaria in Geneva, where she is responsible for overseeing management of funding decisions in Africa, Asia, Eastern Europe and Latin America. Her work brings her into regular contact with researchers and practitioners active in the field of youth and international health. She is the author of the best-selling book AIDS in the Sociocultural Context of India (Mumbai, 2002), a Founding Editor of Culture, Health and Sexuality, and on the editorial board of several journals including Sex Education. Prior to her present post, she was Vice President of the Population Council in New York and Director of its International Programs Division. Before that, she held a senior post within the Joint United Nations Programme on HIV/AIDS (UNAIDS) in Geneva. In the year 2000, together with Peter Aggleton and Andrew Ball, she edited a special issue of the journal Sex and Relationship Therapy on the theme Communicating with Young People. This addressed sex and substance use concerns. Andrew Ball (AB) is currently the Responsible Officer for the Regions of Europe and the Eastern Mediterranean in the WHO Department of HIV/AIDS, covering 75 countries across western, central and eastern Europe, the Middle East, north Africa and south-west and central Asia. In this capacity he works closely with countries in supporting the development and implementation of national and regional HIV/AIDS programmes. He has worked in WHO for twelve years, initially in the Programme on Substance Abuse, then the Department of Child and Adolescent Health and Development, before moving to the Department of HIV/AIDS. His work has focused on the young people, substance use and HIV/AIDS. He was co-editor of the book Injection Drug Use and HIV/AIDS, has authored a number of chapters and papers on HIV/AIDS prevention among injecting drug users, HIV/AIDS and substance use assessment methods and substance use among street children. Together with Purnima Mane and Peter Aggleton, he edited a special issue of the journal Sex and Relationship Therapy in the year 2000 on the theme Communicating with Young People, which examined addressed sex and substance use issues and concerns.

A Preview for this title is currently not available.
More Books By Peter Aggleton
View All