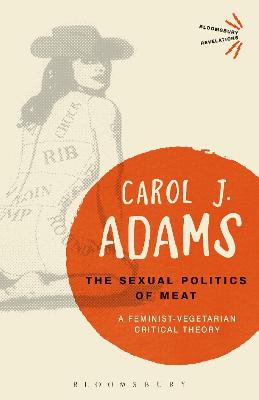 The Sexual Politics of Meat is Carol Adams' inspiring and controversial exploration of the interplay between contemporary society's ingrained cultural misogyny and its obsession with meat and masculinity. First published in 1990, the book has continued to change the lives of tens of thousands of readers into the second decade of the 21st century.

Published in the year of the book's 25th anniversary, the Bloomsbury Revelations edition includes a substantial new afterword, including more than 20 new images and discussions of recent events that prove beyond doubt the continuing relevance of Adams' revolutionary book.

» Have you read this book? We'd like to know what you think about it - write a review about Sexual Politics of Meat - 25th Anniversary Edition book by Carol J. Adams and you'll earn 50c in Boomerang Bucks loyalty dollars (you must be a Boomerang Books Account Holder - it's free to sign up and there are great benefits!)

Carol J. Adams is an activist and author of The Pornography of Meat, Living Among Meat Eaters, and many other books challenging a sexist, meat-eating world. She is a sought-after speaker throughout North America and Europe, and has been invited to more than 100 campuses to show "The Sexual Politics of Meat Slide Show," which is always being updated to include contemporary cultural representations.

A Preview for this title is currently not available.
More Books By Carol J. Adams
View All

Ecofeminism: Feminist Intersections with Other Animals and the Earth
$252.00 $280.00