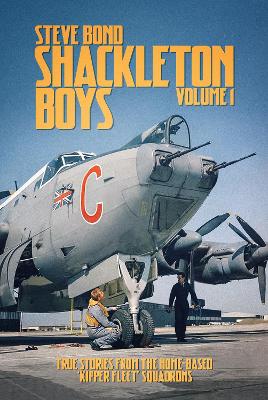 Essentially a development of the Avro Lancaster via the later Lincoln, the Avro Shackleton was the RAF's first line of defence in the maritime role from 1951 for twenty years, thereafter continuing to serve as an airborne early warning aircraft for another twenty, until 1991. The 'Old Grey Lady', the 'Growler', '20,000 rivets in loose formation', but mostly known simply as the 'Shack', it is viewed with great affection by those who flew and maintained it. In addition to its traditional sub-hunting role, it was also used extensively for search and rescue operations, and even as a conventional bomber in the Aden theatre. Operating around the world with squadrons based in the UK, the Mediterranean, Middle East and Far East, 'Shacks' were also used to support the blockade of oil supplies to Rhodesia during the UDI crisis in the '60s and '70s, and searching for gun-running boats during the Indonesian Confrontation. All of the Boys' stories are from air and ground crew veterans themselves, and because there are so many vital and entertaining accounts, Steve Bond has divided his subject into two volumes. Consequently this volume will cover UK-based units flying from Ballykelly (including Aldergrove), Farnborough, Honington, Kinloss, Lossiemouth, St Eval and St Mawgan, plus many overseas detachments including Christmas Island and Majunga. To complement the detailed personal accounts and anecdotes are hundreds of original photographs and extensive appendices. A feast for any 'Shack' or military aviation aficionado. Volume Two (coming in 2019) will cover those units based overseas at Changi, Gan, Gibraltar, Khormaksar, Luqa (and Hal Far), and Sharjah, plus the South African Air Force operations from Ysterplaat/Malan. AUTHOR: A life-long aviation professional and historian, Dr Steve Bond has spent over forty years working in the industry. He served in the Royal Air Force for twenty-two years as an aircraft propulsion technician, with tours on many different aircraft, and was part of the Eurofighter Typhoon project team in the MoD. Steve then spent thirteen years with City University London as a senior lecturer and course director. He developed and ran the world's first MSc Air Safety Management programme for aviation professionals and continues to lecture on the subject. He has a PhD in Air Safety Management, is a chartered engineer and a fellow of the Royal Aeronautical Society. He is also the author of many magazine articles and books including: Heroes All, Special Ops Liberators (with Richard Forder), Wimpy, Meteor Boys and Javelin Boys for Grub Street.

» Have you read this book? We'd like to know what you think about it - write a review about Shackleton Boys: Volume 1: True Stories from the Home-Based `Kipper Fleet' Squadrons book by Steve Bond and you'll earn 50c in Boomerang Bucks loyalty dollars (you must be a Boomerang Books Account Holder - it's free to sign up and there are great benefits!)