Shadow of the Hawk

Description - Shadow of the Hawk by David Gilman

Winter, 1364. Sir Thomas Blackstone, Edward III's Master of War, has travelled to France to secure Brittany for England. But soon he is ordered to Castile, to defend England's ally from the French.

Thomas Blackstone, Edward III's Master of War takes to Spain in the seventh instalment of David Gilman's gripping chronicle of the Hundred Years' War. Winter, 1364. The King is dead. Defeated on the field of Poitiers, Jean Le Bon, King of France, honoured his treaty with England until his death. His son and heir, Charles V, has no intention of doing the same. War is coming and the predators are circling. Sir Thomas Blackstone, Edward III's Master of War, has been tasked with securing Brittany for England. In the throes of battle, he rescues a young boy, sole witness to the final living breaths of the Queen of Castile. The secret the boy carries is a spark deadly enough to ignite conflict on a new front - a front the English cannot afford to fight on. So Blackstone is ordered south to Castile, across the mountains to shepherd Don Pedro, King of Castile, to safety. Accompanied only by a small detachment of his men and a band of Moorish cavalrymen loyal to the king, every step takes Blackstone further into uncertain territory, deeper into an unyielding snare. For the Master of War, the shadow of death is always present.

Other Editions - Shadow of the Hawk by David Gilman 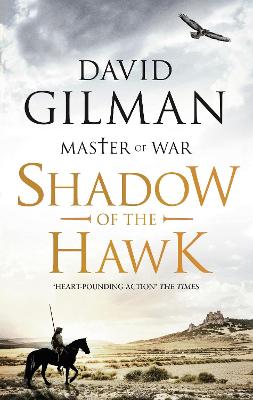 Book Reviews - Shadow of the Hawk by David Gilman

» Have you read this book? We'd like to know what you think about it - write a review about Shadow of the Hawk book by David Gilman and you'll earn 50c in Boomerang Bucks loyalty dollars (you must be a Boomerang Books Account Holder - it's free to sign up and there are great benefits!)


A Preview for this title is currently not available.
More Books By David Gilman
View All