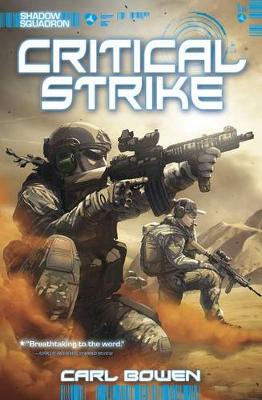 In the modern world of politics and warfare, the critical battles take place behind the scenes--and that's just where Shadow Squadron excels. Under the leadership of Lieutenant Commander Ryan Cross, this elite team of soldiers completes missions around the globe that no one else has the talent or training to handle. But as the team's successes mount, so does the complexity of their missions--and the best course of action becomes difficult to determine. In their Starred Review of Elite Infantry, Kirkus Reviews lauded the Shadow Squadron series as ""breathtaking to the word"" with ""top-drawer renderings of secret military missions around the globe."" This action packed series delivers exciting stories highly relevant to today's real-world conflicts.

» Have you read this book? We'd like to know what you think about it - write a review about Shadow Squadron: Critical Strike book by ,Carl Bowen and you'll earn 50c in Boomerang Bucks loyalty dollars (you must be a Boomerang Books Account Holder - it's free to sign up and there are great benefits!)