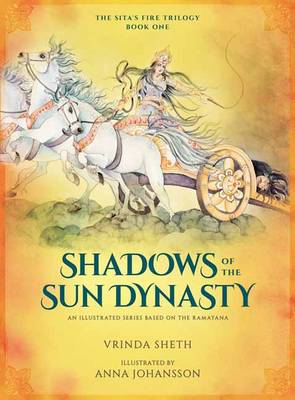 Shadows of the Sun Dynasty: An Illustrated Series Based on the Ramayana

Description - Shadows of the Sun Dynasty: An Illustrated Series Based on the Ramayana by Vrinda Sheth

Welcome to the royal city of Ayodhya, a realm ruled by the Sun dynasty, where peace reigns among the citizens while discord simmers behind the palace walls. A prophecy predicts that a son of the Sun dynasty will slay the immortal Ravana and defeat his demon army-but how will a mere human succeed where all the gods have failed?

Meanwhile, Ayodhya's emperor is torn between his own needs and the needs of the empire. His rebellious third wife, raised as a warrior, is haunted by her past. A defiant servant, stigmatized by her deformity, is willing to destroy the empire to achieve her own aims. A prince, unaware of his own divine origin, falls in love with a princess so extraordinary even the all-seeing sages cannot fathom her destiny. Shape-shifting blood-drinkers from the celestial realm fill the forests around the city, and the time of prophecy is drawing near-but will the blessings of the gods be enough to fend off the darkness growing in the heart of Ayodhya?

A truly original reimagining of the classic Indian epic, the Ramayana, as told primarily through the eyes of the women behind the throne, Shadows of the Sun Dynasty reveals an entirely new perspective on an ancient story.

Set in a world of kings and queens, celestial battles, invisible foes, and family rivalries, this epic tale forges legends in the fires of betrayal and prophecy.

Buy Shadows of the Sun Dynasty: An Illustrated Series Based on the Ramayana by Vrinda Sheth from Australia's Online Independent Bookstore, Boomerang Books.


Book Reviews - Shadows of the Sun Dynasty: An Illustrated Series Based on the Ramayana by Vrinda Sheth

» Have you read this book? We'd like to know what you think about it - write a review about Shadows of the Sun Dynasty: An Illustrated Series Based on the Ramayana book by Vrinda Sheth and you'll earn 50c in Boomerang Bucks loyalty dollars (you must be a Boomerang Books Account Holder - it's free to sign up and there are great benefits!)

VRINDA SHETH was born in Sweden and was raised on stories from ancient India. She began writing while studying classical dance in Kalakshetra, South India. Vrinda has a BA in English from the University of Florida and lives in Florida with her husband and daughter. ANNA JOHANSSON is a self-taught watercolor artist from Sweden. Her artwork is inspired by the mystical yoga tradition of ancient India. She lives in Florida with her husband. When she is not creating art, she enjoys spending time with her granddaughter. This mother-daughter team have worked together on the Sita's Fire trilogy for over a decade. Their first book won an Independent Publisher Book Award, received an honorable mention at the New York Book Show, and was a finalist in the USA Best Book Awards. Anna and Vrinda have nurtured their relationship and their respective crafts through their joint artistic ventures.

A Preview for this title is currently not available.
More Books By Vrinda Sheth
View All