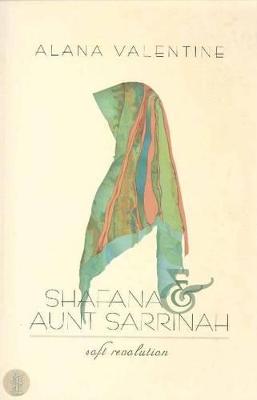 What do you do when you profoundly disagree with someone you love Wearing a hijab is a touchstone of religious identity, but it is also imbued with a complex array of historical and contemporary meanings. The cultural meaning of the hijab has become a wedge between generations.

At the heart of Shafana and Aunt Sarrinah is the relationship between an aunt and her niece. Both devout Muslims, the younger woman wants to put on a headscarf, the older woman tries to dissuade her. For Aunt Sarrinah, the hijab represents a world from which she has escaped; for her niece, Shafana, it is a personal statement of renewed faith.

» Have you read this book? We'd like to know what you think about it - write a review about Shafana and Aunt Sarrinah book by Alana Valentine and you'll earn 50c in Boomerang Bucks loyalty dollars (you must be a Boomerang Books Account Holder - it's free to sign up and there are great benefits!)

Alana Valentine's writing has been awarded the 2004 Queensland Premier's Award for best Drama Script, 2003 NSW Writer's Fellowship, the 2002 Rodney Seaborn Playwrights' Award and an International Writing Fellowship at Shakespeare's Globe Theatre in London. She has also received a 2001 commendation for the Louis Esson Prize, a 1999 AWGIE Award, a residency at the Banff Playwrights' Conference in Canada, the ANPC/New Dramatists Award in NYC, a Churchill Fellowship for England and Ireland and a NSW Premier's Award. In 2012 she won the prestigious STAGE Award for Ear to the Edge of Time. Her stage plays include Butterfly Dandy, Covenant, The Prospectors, Run Rabbit Run, Titania's Boy, Savage Grace, Row of Tents, The Conjurers, Ozone, Spool Time and Swimming the Globe. Alana has written numerous award winning radio plays as well as episodes of the television series McLeod's Daughters and Fat Tuesday.

The Curious Incident of the Dog in the Night-Time (SparkNotes Literature Guide)
SparkNotes
$8.99 $9.99

Past the Shallows
Favel Parrett
$16.99 $19.99
More Books By Alana Valentine
View All