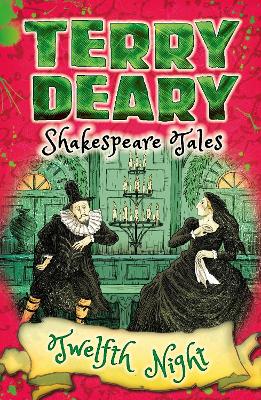 From the bestselling author of Horrible Histories...

Jane and John have uncovered a wicked plot to steal the throne from Queen Elizabeth I of England while she watches a play. Can they stop it in time? Meanwhile, on stage, Olivia loves the boy Caesario, who is in fact not a boy but a girl, Viola. Viola loves Orsino but Orsino loves Olivia. What a tangle, what a jumble...

Terry Deary's Shakespeare Tales explore the fascinating world of William Shakespeare through the eyes of children who could have lived at the time. Join master storyteller Terry Deary for a trip back in time to Queen Elizabeth's court, where everyone is up to something and they could be up to no good! This edition features notes for the reader to help extend learning and exploration of the historical period.

» Have you read this book? We'd like to know what you think about it - write a review about Shakespeare Tales: Twelfth Night book by Terry Deary and you'll earn 50c in Boomerang Bucks loyalty dollars (you must be a Boomerang Books Account Holder - it's free to sign up and there are great benefits!)

Terry Deary is the author of over 200 fiction and non-fiction books, which have been published in 32 languages. His historical fiction for older children Tudor Terror has been praised as "a marvellous blend of fact and fiction" (School Librarian). His non-fiction has been consistently in the best-seller lists since 1994. His Horrible Histories celebrated their 15th anniversary in 2008, having sold over 10 million copies worldwide and been adapted as television series, theatre tours and museum exhibitions. Terry Deary was voted "Outstanding children's non-fiction author of the 20th Century" by Books for Keeps magazine.