Amelia Bassano was born in 1569 into a family of Venetian Jews who were court musicians to Queen Elizabeth I. At about the age of thirteen, she became mistress to the fifty-six-year-old Lord Hunsdon, Henry VIII's reputed son by Mary Boleyn. As Lord Chamberlain, Hunsdon was in charge of the English theatre and would become the patron of the company that performed the Shakespearean plays. Amelia lived with him for a decade, during which time she also had an affair with the playwright Christopher Marlowe. When she became pregnant, Amelia was exiled from court and next surfaces as the mysterious 'dark lady' in Shakespeare's sonnets. At the age of forty-two, she became the first woman to publish a book of original poetry, employing linguistic features resembling the later Shakespearean plays. Amelia died in poverty in 1645. Drawing upon a wealth of documentary evidence, this controversial and provocative book unites Tudor history, feminism, and Shakespeare scholarship to demonstrate that Amelia Bassano was in all the right places and had all the right knowledge, skills, and contacts to have produced the Shakespearean canon. 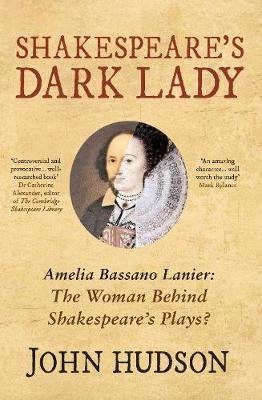 » Have you read this book? We'd like to know what you think about it - write a review about Shakespeare's Dark Lady book by John Hudson and you'll earn 50c in Boomerang Bucks loyalty dollars (you must be a Boomerang Books Account Holder - it's free to sign up and there are great benefits!)

A Preview for this title is currently not available.
More Books By John Hudson
View All