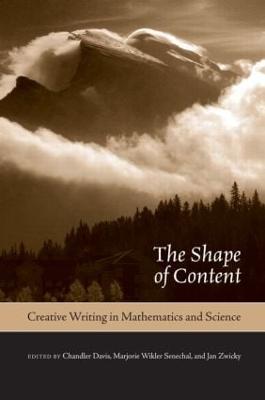 Creative Writing in Mathematics and Science

This book is a collection of creative pieces--poems, short stories, essays, play excerpts--that give shape to mathematical and scientific content. This book portrays by example how various people work creatively with ideas from mathematics and other sciences. Creative writing about the content of mathematics and science is rare, and creative writing about the activity of mathematical and scientific creation is even rarer. And yet, when it occurs, it can be extremely popular, as well known plays like Proof and Copenhagen and biographies like A Beautiful Mind and The Man Who Loved Only Numbers attest. What draws the public to these works? And why, given that something does, are there so few examples of literature that engages these themes? Mathematics and science are part of world culture, part of the human spirit, fit subjects for art of all kinds.

Book Reviews - The Shape of Content by Chandler Davis

» Have you read this book? We'd like to know what you think about it - write a review about Shape of Content book by Chandler Davis and you'll earn 50c in Boomerang Bucks loyalty dollars (you must be a Boomerang Books Account Holder - it's free to sign up and there are great benefits!)

Chandler Davis (PhD Harvard 1950) has been on the faculty of the mathematics department at the University of Toronto since 1962. He has been an editor of Mathematical Reviews and a Vice-President of the American Mathematical Society. His mathematical research ranges quite widely. His (non-mathematical) prose has appeared in Astounding Science-Fiction, The Nation, and elsewhere; his poetry has appeared in Canadian Forum, Saturday Night, This Magazine, and various little magazines. Combining his personae as mathematician and wordsmith, he has been on the editorial team of The Mathematical Intelligencer since 1987. Marjorie Wikler Senechal, a geometer and writer, is Louise Wolf Kahn Professor Emerita in Mathematics and History of Science and Technology at Smith College, where among other things she served as the (founding) Director of the Kahn Liberal Arts Institute. Her many books include "Quasicrystals and Geometry," "Shaping Space" and -- outside of mathematics -- "Long Life to Your Children! a portrait of High Albania", and "American Silk 1830 - 1930." Marjorie collaborated with Ellen Maddow on "Delicious Rivers", a play on and about Penrose tilings. With Chandler Davis, she is co-Editor-in-Chief of The Mathematical Intelligencer. Jan Zwicky, a musician and a poet, also teaches in the Philosophy Department at the University of Victoria. She has published seven collections of poetry, including "Songs for Relinquishing the Earth", which won Canada's Governor General's Award in 1999, and "Robinson's Crossing", which won the Dorothy Livesay Prize in 2004. Her books on philosophy include "Lyric Philosophy" and "Wisdom & Metaphor" (short-listed for a Governor General's Award in 2004-- as was "Robinson's Crossing"). Her poem sequence "Practising Bach" was commissioned by Tafelmusik for reading together with a Bach performance. Jan has published a number of essays on music, poetry, and the environment.

A Preview for this title is currently not available.
More Books By Chandler Davis
View All