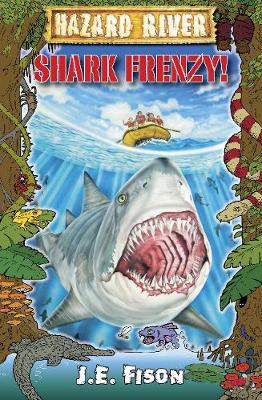 Jack, Ben, Lachlan and Mimi discover a dead shark washed up on Hazard River. The shark has no fins. When another shark washes up without fins, the friends begin an investigation which leads them to a marine park. They discover fishermen killing grey nurse sharks and taking their fins for shark fin soup in Asia. The Hazard River crew must stop them!

» Have you read this book? We'd like to know what you think about it - write a review about Shark Frenzy! book by JE Fison and you'll earn 50c in Boomerang Bucks loyalty dollars (you must be a Boomerang Books Account Holder - it's free to sign up and there are great benefits!)

While holidaying on the banks of Hazard River (a name that doesn’t exactly inspire relaxation), brothers, Jack and Ben, and friend Lachlan find a dead shark minus its fins. This might very well be the work of pirates—or perhaps the unfortunate beastie was molested by a giant squid. Whatever the cause, the boys are determined to get to the bottom of it.

And so, off the intrepid trio goes, sailing into the moonlight, dodging sandbanks and soldier crabs—and maybe, just maybe, pirates. But it is only the next day after the discovery of another finless shark and with knowledgeable, well-travelled Mimi onboard that the mystery stands a chance of being solved.

While 10 year old narrator Jack comes across as being a little too mature at times, he is a character readers will relate to. So, too, are his dead critter collector brother, Ben, daredevil Lachlan and level-headed Mimi. Written in a light, humorous style with covers that are bright and busy, short chapters, snappy dialogue and plenty of action, these books with attract even the most reluctant reader. With two more titles to come: Tiger Terror and Bat Attack, I can see this series being popular with action-seeking kids 7+.

JE Fison is a television reporter turned children's author. Her work has been short-listed for the Raspberry and Vine Short Story Competition 2009 and long-listed for The Times (London) Children's Fiction Competition 2009. Prior to writing the Hazard River series, she spent 20 years in news and features in Australia, Asia and the UK. Julie was a television news reporter and anchor for Asia Television in Hong Kong, covering the rise and fall of the student movement in Beijing, the collapse of communism in Eastern Europe and the developments that led up to the handover of Hong Kong to China. She spends as much time as possible on the Noosa River, the inspiration for the Hazard River series.