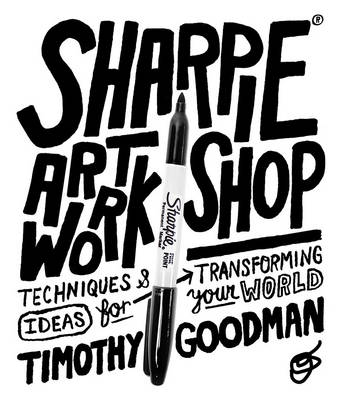 Techniques and Ideas for Transforming Your World

Bold and sharp, brilliant and vivid, Sharpie markers can be found in art, office, and stationery supply stores, drugstores, mass-market and crafts chains - almost anywhere writing utensils are sold. Sharpies can be used on virtually any surface, from the traditional (paper and canvas) to the unexpected (fabric, plastic, ceramics, glass, wood, stone, metal). In addition to the original fine point version, Sharpies are produced in five tip widths, several formulations, and in more than 30 colors, plus silver metallic. Their familiarity, accessibility, and clean, bold, dense line - especially the graphic impact that can be achieved with classic black - have made Sharpie markers the go-to medium for creatives of all stripes.In Sharpie Art Workshop, designer, artist, and art director Timothy Goodman explores Sharpie writing products, the materials and supplies that can be used to enhance or modify them, and the range of creative techniques and effects that can be achieved. Through a series of examples and exercises, Goodman demonstrates how to make different kinds of marks, patterns, and images on a variety of surfaces. Inspiring works by noted artists from all over the world who use Sharpie in interesting and innovative ways are also included.Sharpie Art Workshop offers ideas and inspiration to anyone who's looking to explore the creative potential of this exciting medium. So when you make your mark, what will you create?

» Have you read this book? We'd like to know what you think about it - write a review about Sharpie Art Workshop book by Timothy Goodman and you'll earn 50c in Boomerang Bucks loyalty dollars (you must be a Boomerang Books Account Holder - it's free to sign up and there are great benefits!)

Designer, illustrator, and art director Timothy Goodman currently runs his own studio, working for Airbnb, Google, J.Crew, MoMA, The New Yorker, and The New York Times and other clients, for whom he has created many artworks using Sharpies. Previously, Timothy worked in-house atApple Inc., where he helped integrate Apple's visual language, both domestically and internationally, across third-party environments, retail stores, events, and campaign launches. Prior to that, he was a senior designer with the experiential design firmCollins, where he worked for clients such as CNN and Microsoft. He has received awards from most major design and illustration publications, including the Art Directors Club Young Guns, Communication Arts, Graphic Design USA magazines People to Watch, and Print magazines New Visual Artist. Born in Cleveland, Ohio, Timothy began his career as a book jacket designer at Simon & Schuster, and graduated from the School of Visual Artsin New York, where he now teaches. In 2013, Timothy and designer Jessica Walsh created a personal project and website called 40 Days of Dating (fortydaysofdating.com).

A Preview for this title is currently not available.
More Books By Timothy Goodman
View All