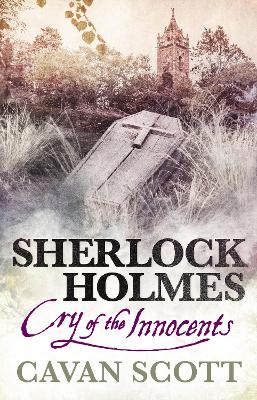 Cry of the Innocents

It is 1891, and a catholic priest arrives at 221b baker street, only to utter the words "il corpe" before suddenly dropping dead. Though the man's death is attributed to cholera, when news of another dead priest reaches Holmes, he becomes convinced that the men have been poisoned. He and Watson learn that the victims were on a mission from the Vatican to investigate a miracle; it is said that the body of eighteenth-century philanthropist and slave trader Edwyn Warwick has not decomposed. But should the Pope canonise a man who made his fortune through slavery? And when Warwick's body is stolen, it becomes clear that the priests' mission has attracted the attention of a deadly conspiracy... » Have you read this book? We'd like to know what you think about it - write a review about Sherlock Holmes book by Cavan Scott and you'll earn 50c in Boomerang Bucks loyalty dollars (you must be a Boomerang Books Account Holder - it's free to sign up and there are great benefits!)

Number one bestselling author Cavan Scott has written over 90 books and audio dramas for such popular series as Doctor Who, Star Wars, Highlander, Judge Dredd and Blake's 7. He is the author of Sherlock Holmes - The Patchwork Devil, published by Titan Books, and the forthcoming Sherlock Holmes - Cry of the Innocents.