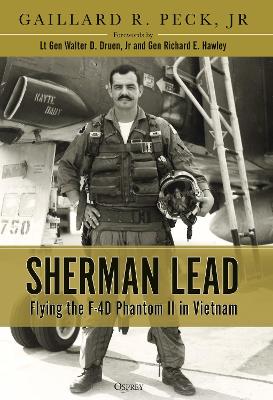 Written by a pilot who flew near-daily combat missions, this engrossing book is the story of one man, his colleagues and his machine, the mighty F-4 Phantom II, at war.

Sherman Lead is the gripping story of a year flying the F-4 in combat during the Vietnam War, told through the eyes of a fighter pilot. Operating out of Ubon Royal Thai Air Base, Thailand in 1968-69, Gail Peck and his squadronmates in the 433rd Tactical Fighter Squadron of the 8th Tactical Fighter Wing were tasked with flying combat missions into North Vietnam and Laos at this time as part of Operations Rolling Thunder and Steel Tiger.

The F-4 was heavily involved in the air-to-ground mission at this time, with targets being well defended by enemy anti-aircraft artillery and surface-to-air missiles. Gail Peck's arrival in-theatre coincided with the beginning of electro-optical and laser guided 'smart' bomb combat operations. There were periods of fierce combat interspersed with lulls, and the fighting was intense and unforgettable to those who participated. Some men lived through it, and others died without a clear understanding of why.

» Have you read this book? We'd like to know what you think about it - write a review about Sherman Lead: Flying the F-4D Phantom II in Vietnam book by Col (Ret.) Gaillard R. Peck, Jr and you'll earn 50c in Boomerang Bucks loyalty dollars (you must be a Boomerang Books Account Holder - it's free to sign up and there are great benefits!)


A Preview for this title is currently not available.
More Books By Col (Ret.) Gaillard R. Peck, Jr
View All