Despite many wanting him to fail, Piers Morgan took over from US TV legend Larry King at CNN in 2010 and went on to cover some of the most shocking news events in recent US history, such as the killing of Osama bin Laden, the devastation caused by Hurricane Sandy and horrific shooting rampages including the Newtown school massacre.In Shooting Straight Piers shares the diaries that he kept in this rollercoaster period of his life.Thrown right into the maelstrom of the US media, Piers finds himself rubbing shoulders with everyone from Mel Gibson and Charlie Sheen to the US President himself. Not to mention, Oprah, Rod Stewart, Meryl Streep, Woody Allen, Dustin Hoffman, Janet Jackson, Stevie Wonder, Barbra Streisand, Goldie Hawn, the Dalai Lama and Iranian leader Mahmoud Ahmadinejad.As Piers gets more and more drawn into commenting on American culture, one issue - gun control - provokes the most incredible and heart-rending response of all, dividing the country dramatically. And, as usual, Piers is in the thick of it. 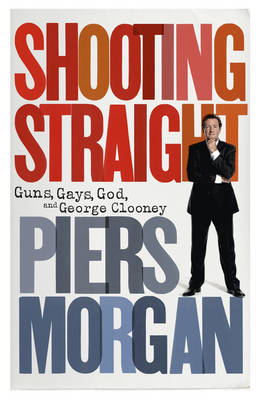 » Have you read this book? We'd like to know what you think about it - write a review about Shooting Straight book by Piers Morgan and you'll earn 50c in Boomerang Bucks loyalty dollars (you must be a Boomerang Books Account Holder - it's free to sign up and there are great benefits!)

Piers Morgan was born in 1965. He studied journalism at Harlow College, beginning his career in local south London newspapers. Spotted by Kelvin MacKenzie of the Sun he was given his own showbiz column, Bizarre. Rupert Murdoch made him editor of the News of the World in January 1994; he was headhunted two years later to edit the Mirror where he stayed until 2004 when he was fired following his decision to publish photos of British soldiers apparently abusing Iraqi prisoners of war. He presented two series of Tabloid Tales for BBC2 and co-hosted the current affairs show Morgan and Platell on Channel 4. Piers was also a judge for many years on both Britain's Got Talent and America's Got Talent, and won the first series of Donald Trumps's Celebrity Apprentice show in America. He currently hosts Britain's most popular interview show, Life Stories, on ITV. And is the anchor of the nightly news and interview show Piers Morgan Live on CNN, where he replaced the legendary Larry King. This is his fourth volume of diaries.