If the Al-Qaeda terrorists who attacked the United States in 2001 wanted to weaken the West, they achieved their mission by striking a blow at the heart of democracy.

Since 9/11 governments including those of the USA, the UK, France and Australia have introduced tough, intimidating legislation to discourage the legitimate activities of a probing press, so greatly needed after the Iraq War proved that executive government could not be trusted.

Often hiding behind arguments about defending national security and fighting the war on terror, governments criminalised legitimate journalistic work, ramping up their attacks on journalists' sources, and the whistle-blowers who are so essential in keeping governments honest.

Through detailed research and analysis, this book, which includes interviews with leading figures in the field, including Edward Snowden, explains how mass surveillance and anti-terror laws are of questionable value in defeating terrorism, but have had a 'chilling effect' on one of the foundations of democracy: revelatory journalism.

Other Editions - Shooting the Messenger by Andrew Fowler 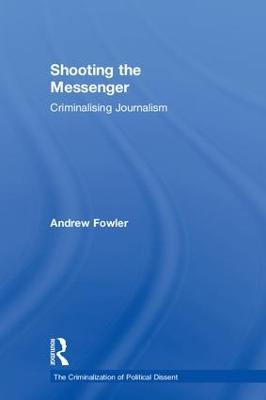 » Have you read this book? We'd like to know what you think about it - write a review about Shooting the Messenger book by Andrew Fowler and you'll earn 50c in Boomerang Bucks loyalty dollars (you must be a Boomerang Books Account Holder - it's free to sign up and there are great benefits!)

Andrew Fowler is an award-winning investigative journalist and a former reporter with the Australian Broadcasting Corporation's (ABC) Foreign Correspondent and its premier investigative TV documentary programme, Four Corners. Andrew began his journalism career in the early 1970s, covering the IRA bombing campaign for the London Evening News. He first interviewed Julian Assange for Foreign Correspondent in early 2010 and went on to write the bestselling book, The Most Dangerous Man in the World (Melbourne University Press, 2011) which has been translated and published in countries as diverse as China, South Korea, the USA, Russia, Indonesia, Romania and Taiwan.

The Most Dangerous Man In The World: Julian Assange and WikiLeaks' Fight for Freedom
Available, ships in 7-10 business days
$29.74 $34.99

An Exposition of the Book of Common Prayer and Administration of the Sacraments and Other Rites and
Available, ships in 8-11 days
$69.98 $77.76