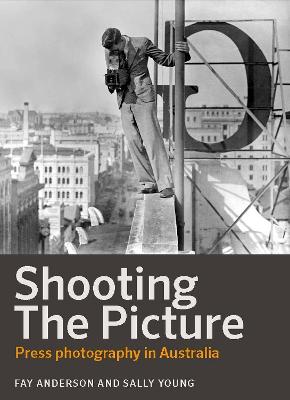 Shooting The Picture is the story of Australian press photography from 1888 to today-the power of the medium, seismic changes in the newspaper industry, and photographers who were often more colourful than their subjects. This groundbreaking book explores our political leaders and campaigns, crime, war and censorship, international events, disasters and trauma, sport, celebrity, gender, race and migration. It maps the technological evolution in the industry from the dark room to digital, from picturegram machines to iPhones, and from the death knock to the ascendancy of social media. It raises the question whether these changes will spell the end of traditional press photography as we know it.

» Have you read this book? We'd like to know what you think about it - write a review about Shooting the Picture book by Sally Young and you'll earn 50c in Boomerang Bucks loyalty dollars (you must be a Boomerang Books Account Holder - it's free to sign up and there are great benefits!)

Associate Professor Fay Anderson lectures in the School of Media, Film and Journalism at Monash University. She has published widely on media history, war journalism, genocide, photography and violence. Fay Anderson and Richard Trembath's book Witnesses to War- The History of Australian Conflict Reporting was published by MUP in 2011. Associate Professor Sally Young is a reader in political science and an Australian Research Council Future Fellow for 2014-17. She has published extensively in the areas of Australian politics, Australian media, political communication and journalism studies and writes a monthly column for Fairfax Media.

A Preview for this title is currently not available.
More Books By Sally Young
View All

Government Communication in Australia
No Stock on Hand, Supplier Has No Due Date for Supply.
$28.76 $31.95

Paper Emperors: The rise of Australia's newspaper empires
No Stock on Hand, Supplier Has No Due Date for Supply.
$35.99 $39.99

Paper Emperors: The rise of Australia's newspaper empire
No Stock on Hand, Supplier Has No Due Date for Supply.
$85.46 $94.95