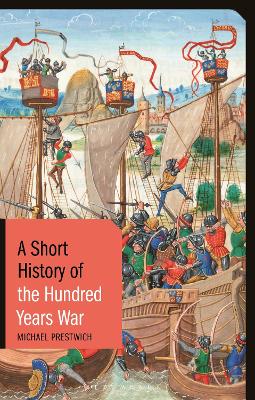 A Short History of the Hundred Years War

The conflict that swept over France from 1337 to 1453 remains the longest military struggle in history. A bitter dynastic fight between Plantagenet and Valois, The Hundred Years War was fought out on the widest of stages while also creating powerful new nationalist identities. In his vivid new history, Michael Prestwich shows that it likewise involved large and charismatic individuals: Edward III, claimant to the French throne; his son Edward of Woodstock, the Black Prince; wily architect of the first French victories, Bertrand du Guesclin; chivalric hero Jean Boucicaut; inspirational leader Henry V, unlikely winner at Agincourt (1415), who so nearly succeeded in becoming King of France; and the martyred Maid of Orleans, Joan of Arc, thought to be divinely inspired. Offering an up-to-date analysis of military organization, strategy and tactics, including the deadly power of English archery, the author explains the wider politics in a masterful account of the War as a whole: from English victory at Sluys (1340) to the turn of the tide and French revival as the invader was driven back across the Channel. » Have you read this book? We'd like to know what you think about it - write a review about Short History of the Hundred Years War book by Michael Prestwich and you'll earn 50c in Boomerang Bucks loyalty dollars (you must be a Boomerang Books Account Holder - it's free to sign up and there are great benefits!)

Michael Prestwich, OBE, is Emeritus Professor of History and a former Pro-Vice Chancellor at Durham University. His many books include Plantagenet England, 1225-1360 (2005); Knight: The Medieval Warrior's (Unofficial) Manual (2010); Armies and Warfare in the Middle Ages: The English Experience (1996); English Politics in the Thirteenth Century (1990); The Three Edwards: War and State in England, 1272-1377 (1980); and War, Politics and Finance under Edward I (1972).