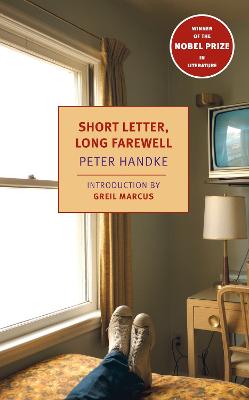 By Nobel Prize Winner Peter Handke
Short Letter, Long Farewell is one the most inventive and exhilarating of the great Peter Handke's novels. Full of seedy noir atmospherics and boasting an air of generalized delirium, the book starts by introducing us to a nameless young German who has just arrived in America, where he hopes to get over the collapse of his marriage. No sooner has he arrived, however, than he discovers that his ex-wife is pursuing him. He flees, she follows, and soon the couple is running circles around each other across the length of America-from Philadelphia to St. Louis to the Arizona desert, and from Portland, Oregon, to L.A. Is it love or vengeance that they want from each other? Everything's spectacularly unclear in a book that is travelogue, suspense story, domestic comedy, and Western showdown, with a totally unexpected Hollywood twist at the end. Above all, Short Letter, Long Farewell is a love letter to America, its landscapes and popular culture, the invitation and the threat of its newness and wildness and emptiness, with the promise of a new life-or the corpse of an old one-lying just around the corner.

» Have you read this book? We'd like to know what you think about it - write a review about Short Letter, Long Farewell book by Peter Handke and you'll earn 50c in Boomerang Bucks loyalty dollars (you must be a Boomerang Books Account Holder - it's free to sign up and there are great benefits!)

Peter Handke was born in Griffen, Austria, in 1942. He came to early prominence in the 1960s for such experimental plays as Kaspar and rapidly established himself as one of the most respected German-language writers of his generation, producing fiction, translations, memoirs, screenplays, and essays. Among his best-known novels are The Goalie's Anxiety at the Penalty Kick, Repetition, and My Year in the No-Man's Bay. He has directed adaptions of his novels The Left-Handed Woman and Absence and collaborated with filmmaker Wim Wenders on four films, including Wings of Desire. In addition to Short Letter, Long Farewell, NYRB Classics has also published Handke's novel Slow Homecoming and his memoir A Sorrow Beyond Dreams. Greil Marcus is the author of The Shape of Things to Come: Prophecy and the American Voice, Lipstick Traces, and other books; with Werner Sollors he is the editor of A New Literary History of America, forthcoming in 2009. In recent years he has taught at the University of California at Berkeley, Princeton University, the New School University, and the University of Minnesota. He was born in San Francisco and lives in Berkeley. Ralph Manheim (1907-1992) translated Gunter Grass, Louis-Ferdinand Celine, Hermann Hesse, and Martin Heidegger, along with many other German and French authors.

A Preview for this title is currently not available.
More Books By Peter Handke
View All