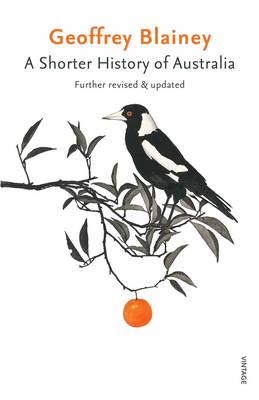 A Shorter History Of Australia

Description - A Shorter History Of Australia by Geoffrey Blainey

A broad, concise and inclusive vision of Australia and Australians by one our most renowned historians

A broad, concise and inclusive vision of Australia and Australians by one our most renowned historians.

After a lifetime of research and debate on Australian and international history, Geoffrey Blainey is well-placed to introduce us to the people who have played a part and to guide us through the events that have created the Australian identity- the mania for spectator sport; the suspicion of the tall poppy; the rivalries of Catholic and Protestant, Sydney and Melbourne, new and old homelands and new and old allies; the conflicts of war abroad and race at home; the importance of technology; defining the outback; the rise and rise of the mining industry; the recognition of our Aboriginal past and Native Title; the successes and failures of the nation.

For this enlarged edition Blainey has rewritten or expanded on various episodes and themes and updated relevant matter. He has described significant events and trends of the early-20th century.

A ready-reference timeline of major events in Australian history is also included.

The Shorter history of Australia is a must for every home and library.

Other Editions - A Shorter History Of Australia by Geoffrey Blainey 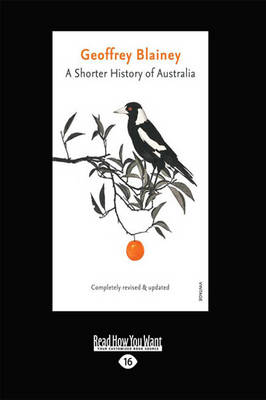 Book Reviews - A Shorter History Of Australia by Geoffrey Blainey

» Have you read this book? We'd like to know what you think about it - write a review about Shorter History Of Australia book by Geoffrey Blainey and you'll earn 50c in Boomerang Bucks loyalty dollars (you must be a Boomerang Books Account Holder - it's free to sign up and there are great benefits!)

Professor Geoffrey Blainey's first book was completed when he was in his early twenties. Since then he has written another thirty-five, including Triumph of the Nomads, The Rush That Never Ended, The Tyranny of Distance and other books on Australia's history. His more recent books on global history, including A Short History of the World, have been translated into many languages and published in places as far apart as Brazil, India, Spain and Turkey. For twenty years he was professor of economic history and then Ernest Scott professor of history at the University of Melbourne, with a term as professor of Australian Studies at Harvard University. He also served the federal government as chairman of the Australia Council, the National Council for the Centenary of Federation, and the Australia-China Council. In New York, in 1988, Blainey received the celebrated Britannica Prize 'for excellence in the dissemination of knowledge for the benefit of mankind'.

A Preview for this title is currently not available.
More Books By Geoffrey Blainey
View All