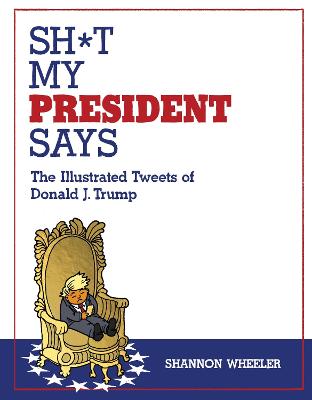 FDR had radio. JFK had TV. Trump has Twitter.Eisner Award-winning cartoonist Shannon Wheeler tackles the 140-character president. For the first time, these revealing snapshots of the world?s most powerful man are collected, curated, and brought to memorable new life as cartoons.Some people are saying, I don?t know, you tell me, but a lot of people are saying this is the greatest book of the year. This guy, Shannon Wheeler, he draws these cartoons for the New Yorker, MAD, the Onion - he?s very, very, good, okay? Now he?s illustrated the most incredible tweets. Wow! You won?t believe what he does with these tweets. I mean, these tweets changed the world, folks. It?s true! It?s very true. EVERYONE is going to want this book - even the haters and losers (Sad!).In Sh*t My President Says, Donald Trump's most revealing tweets are transformed into razor-sharp cartoons, offering a subversive and illuminating insight into the mind of the most divisive political figure of our time. Whether you love him or hate him, this take on Trump will help you come to grips with the man and his ideas thanks to Wheeler's signature mix of slapstick and sophistication.

» Have you read this book? We'd like to know what you think about it - write a review about Sh*t My President Says The Illustrated Tweets Of Donald J. Trump book by Shannon Wheeler and you'll earn 50c in Boomerang Bucks loyalty dollars (you must be a Boomerang Books Account Holder - it's free to sign up and there are great benefits!)

Shannon Wheeler is the Eisner Award-winning creator of Too Much Coffee Man, who has appeared internationally in newspapers, magazines, comic books and opera houses. He has contributed to a variety of publications that include The Onion newspaper and The New Yorker magazine. Wheeler currently lives in Portland, OR with his cats, chickens, bees, girlfriend and children. He publishes a comic every day at tmcm.com.

A Preview for this title is currently not available.
More Books By Shannon Wheeler
View All