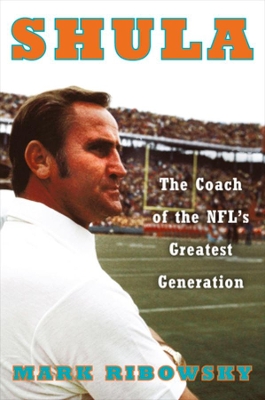 Shula: The Coach of the NFL's Greatest Generation

Description - Shula: The Coach of the NFL's Greatest Generation by Mark Ribowsky

Inducted into the Hall of Fame in 1997, Don Shula remains the winningest coach of all time with 347 career victories and the only undefeated season in NFL history. But before he became the architect of the Dolphins dynasty, Shula was a hardworking kid selling fish on the banks of Lake Erie, the eldest of six children born during the Depression to Hungarian immigrant parents. With rugged determination, the jut-jawed Shula started as a defensive back in the 1950s, later beginning his thirty-two-year coaching career as the then-youngest coach ever with the Baltimore Colts. Acclaimed sports biographer Mark Ribowsky transports us from Shula's blue-collar origins on to his glory days in the Miami heat, evoking America's greatest generation and revealing a man of grit and charisma who never lost sight of a simple creed: "All I've ever done is roll up my sleeves, figure out what to do, and start doing it."

Book Reviews - Shula: The Coach of the NFL's Greatest Generation by Mark Ribowsky

» Have you read this book? We'd like to know what you think about it - write a review about Shula: The Coach of the NFL's Greatest Generation book by Mark Ribowsky and you'll earn 50c in Boomerang Bucks loyalty dollars (you must be a Boomerang Books Account Holder - it's free to sign up and there are great benefits!)


A Preview for this title is currently not available.
More Books By Mark Ribowsky
View All