Description - Shut Out by Kody Keplinger

The battle of the sexes is on.
Most high school sports teams have rivalries with other schools. At Hamilton High, it's a civil war: the football team versus the soccer team. And for her part, Lissa is sick of it. Her quarterback boyfriend, Randy, is always ditching her to go pick a fight with the soccer team or to prank their locker room. And on three separate occasions Randy's car has been egged while he and Lissa were inside, making out. She is done competing with a bunch of sweaty boys for her own boyfriend's attention.

Lissa decides to end the rivalry once and for all: She and the other players' girlfriends go on a hookup strike. The boys won't get any action from them until the football and soccer teams make peace. What they don't count on is a new sort of rivalry: an impossible girls-against-boys showdown that hinges on who will cave to their libidos first. And Lissa never sees her own sexual tension with the leader of the boys, Cash Sterling, coming.

Other Editions - Shut Out by Kody Keplinger 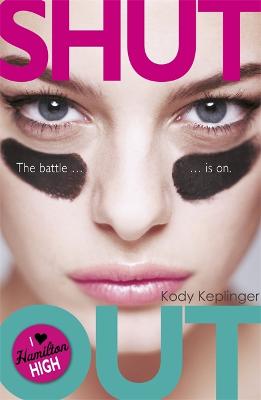 » Have you read this book? We'd like to know what you think about it - write a review about Shut Out book by Kody Keplinger and you'll earn 50c in Boomerang Bucks loyalty dollars (you must be a Boomerang Books Account Holder - it's free to sign up and there are great benefits!)

Kody Keplinger was born and raised in a small Kentucky town. She wrote her first novel, The DUFF (Designated Ugly Fat Friend), during her senior year of high school. The DUFF was a New York Times bestseller, a YALSA Top Ten Quick Pick for Reluctant Readers, and a Romantic Times Top Pick. Since then, Kody has written two more young adult novels, Shut Out and A Midsummer's Nightmare, and a middle grade novel, The Swift Boys & Me. She is the cofounder of Disability in Kidlit, a website devoted to the representation of disability in children's literature. Currently, Kody lives in New York City, where she teaches writing workshops and continues to write books for kids and teens.You can find out more about Kody and her books on her website: www.kodykeplinger.com.

A Preview for this title is currently not available.
More Books By Kody Keplinger
View All