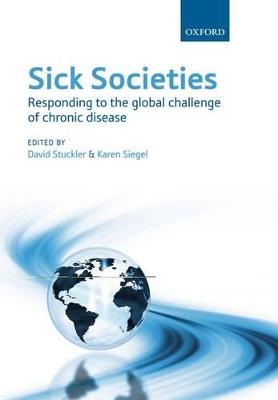 Responding to the global challenge of chronic disease

Chronic diseases-heart disease, diabetes, lung disease, and common cancers-claim more than one out of every two lives worldwide. Within the next few decades their toll will rise, most greatly in developing countries. Yet this rapid growth of chronic diseases is not being met with a proportionate global response. Left unaddressed, they pose a major threat to social and economic development. This book is the first to synthesize the growing
evidence-base surrounding chronic disease, comprehensively addressing the prevention and control of chronic diseases from epidemiologic, economic, prevention/management, and political economy
perspectives. Sick Societies is written in five main parts. The first three chapters explore the causes and consequences of chronic diseases on a global level. Chapter four identifi es different approaches to preventing and managing chronic diseases, while chapters five and six consider the power and politics in global health that have stymied an effective response to chronic disease. In chapter seven, the themes from the first three parts come into focus through a
series of invited contributions from leading public health experts. The final chapter sets out a model of pragmatic and imaginative solidarity, wherein the struggles of the rich and poor to survive are
united by a common cause and shared goals.

» Have you read this book? We'd like to know what you think about it - write a review about Sick Societies book by David Stuckler and you'll earn 50c in Boomerang Bucks loyalty dollars (you must be a Boomerang Books Account Holder - it's free to sign up and there are great benefits!)

David Stuckler, is a university lecturer in sociology at Cambridge University and research fellow at the London School of Hygiene and Tropical Medicine and Chatham House. He has written over 70 peer-reviewed scientific articles on the economics of global health in The Lancet, Nature, and Foreign Affairs in addition to other major journals. He received his undergraduate degree from the University of Texas, his MPH from Yale University and his PhD from Cambridge before becoming a Research Fellow at the Department of Sociology at Oxford and receiving an appointment as an assistant professor at Harvard. He has won grants from the World Health Organization and UNICEF on the political economy of healthcare, and from the European Centers for Disease Control on the impact of economic crises on public health. He has taught at Harvard, Yale, Cambridge and Oxford on the subjects of global politics, economics and health as well as quantitative methods. Karen Siegel, MPH, is a PhD student in Nutrition and Health Sciences and a Woodruff Scholar at Emory University's Laney Graduate School and Rollins School of Public Health. She has written articles on environmental and policy approaches to prevent chronic diseases in India and globally, as well as on diabetes advocacy issues and chronic disease curricula improvement, in Health Affairs, The Lancet, Globalization & Health, and Nursing Standard. Previously, she played a major role in the development of the Oxford Health Alliance's Community Interventions for Health as part of the study's evaluation team, based at Matrix Public Health Solutions, Inc. and later at Oxford University. Siegel received her BA from the University of Pennsylvania and her MPH from Yale School of Public Health. She is co-chair of the Young Professionals Chronic Disease Network.

A Preview for this title is currently not available.
More Books By David Stuckler
View All