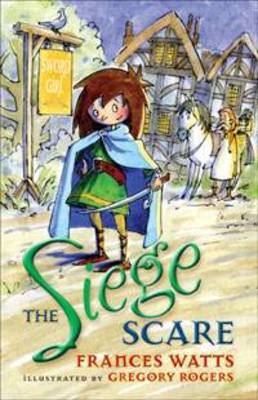 When Sir Walter, Sir Benedict and the other knights go to nearby Roses Castle for a tournament, the enemy knights from Malice attack Flamant. The only hope of rescue lies in getting a message to Sir Benedict, a day's ride away. But the castle is surrounded and there's no way out! With the help of her friends, Tommy devises a daring plan. Can she save Flamant Castle before it's too late?

» Have you read this book? We'd like to know what you think about it - write a review about Siege Scare: Sword Girl Book 4 book by Frances Watts and you'll earn 50c in Boomerang Bucks loyalty dollars (you must be a Boomerang Books Account Holder - it's free to sign up and there are great benefits!)

rances Watts was born in Lausanne, a small city in the French-speaking part of Switzerland, and moved to Sydney when she was three. She spent nearly ten years working with some of Australia's most talented children's authors and illustrators before writing a book of her own, Kisses for Daddy, illustrated by David Legge. Their second collaboration, Parsley Rabbit's Book about Books, won the Children's Book Council of Australia's Eve Pownall Award. Her picture book Goodnight, Mice! (illustrated by Judy Watson) was awarded the 2012 Prime Minister's Award. Gregory Rogers was the first Australian to be awarded the prestigious Kate Greenaway Medal. His first wordless picture book The Boy, the Bear, the Baron, the Bard was selected as one of the Ten Best Illustrated Picture Books of 2004 by the New York Times and short-listed for the CBCA Awards, Younger Readers, 2005 and the APA Best Designed Children's Picture Book, 2004. Gregory sadly passed away in 2013.

Welcome to Country youth edition: An Introduction to our First Peoples for Young Australians
Marcia Langton
$23.99 $29.99
More Books By Frances Watts
View All