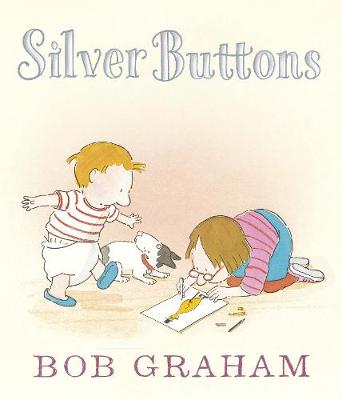 From the multiple award-winning author-illustrator of How to Heal a Broken Wing and A Bus Called Heaven, comes a powerful and poignant celebration of the small moments in life - moments in which we sense the greatest significance, moments when we can see the big picture. At 9.59 on Thursday morning, Jodie draws a duck. Just as she is about to add one final silver button to the duck's boots, her little brother takes his first step. At this exact same moment, a man buys bread, a soldier leaves home, a baby is being born... Here is a book, a story, a philosophy so simply told and yet - in true and inimitable Bob Graham style - so rich with emotion and meaning. From his glorious urban skyscapes to the tender portrayal of a falling feather or the tying of a shoelace or a dog's joy in scratching his back, Bob lets us in on a world view conveyed with humanity, compassion and affection. » Have you read this book? We'd like to know what you think about it - write a review about Silver Buttons book by Bob Graham and you'll earn 50c in Boomerang Bucks loyalty dollars (you must be a Boomerang Books Account Holder - it's free to sign up and there are great benefits!)

From the multi-award winning Australian author / illustrator, Bob Graham, who brought us classics such as Max, Let's Get a Pup, and Tales From the Waterhole, comes yet another memorable story, Silver Buttons.

''At 9.59 on Thursday morning, Jodie drew a duck... At that very same moment, her little brother Jonathan pushed slowly to his feet and took his first step... At that moment, Jonathan's mum played ''Merrily Kiss the Quaker's Wife'' on her tin whistle...''

Wondering what else is happening ''at that very same moment''?

Bob Graham so thoughtfully takes the reader from inside Jonathan's house to outside on the street where he lives, out to other places in his town, heading further out across the city and over the bay; and as we go, we come across the actions of other children, shoppers, a soldier and his mum, a granddad with his granddaughter, a bird catching a worm, and an old homeless woman, the birth of a baby, kids and dogs playing at the beach, and a tanker on its way to China. And all of this happens at that very same moment that Jodie is putting her final silver button on her duck picture, and when Jonathan is taking his first step at 9.59 on Thursday morning.

I love the use of descriptive, gentle language. Bob Graham gives us a real sense of the atmosphere and the identity of the characters, in this point in time, even if it is such a brief encounter.

Bob Graham beautifully integrates the feeling of unity and connectedness between all the people, animals, vehicles, and buildings. He does this through his clever, detailed illustrations that give us that awareness of the bigger picture as the story goes on, at that moment in time. Whether it be sticks being pushed through a gate, or water from a fountain being sprayed over the park, or the view of the whole city by the open bay. The soft hues in his colour palette fit perfectly with the soft breeze and sunlight that glows over the whole city on an Autumn morning.

A heartwarming, emotive story that enables its readers to think outside their own little world, with interesting characters and appealing illustrations. A most memorable, engaging book with humanity and sensitivity, suitable for young and old.

"I loved making this book probably more than any other. It was just like dropping a stone into a lake of very still water and watching the ripples spread out." - Bob Graham.

Bob Graham is a Kate Greenaway-winning author-illustrator who has written and illustrated many acclaimed children's picture books including How to Heal a Broken Wing, How the Sun Got to Coco's House, Max, Jethro Byrde: Fairy Child and April Underhill: Tooth Fairy. His 2011 title, A Bus Called Heaven, is endorsed by Amnesty International UK and was the winner of the 2012 Children's Book Council of Australia Picture Book of the Year Award - a prize Bob has won an unprecedented six times. In 2014, Silver Buttons was awarded a prestigious Prime Minister's Literary Award in Australia. Bob lives in Melbourne.