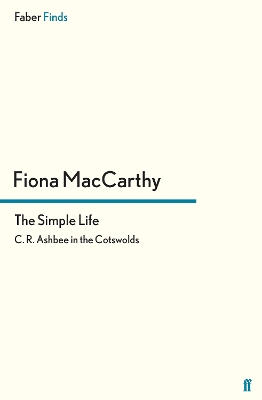 The Simple Life (1981) was Fiona MacCarthy's first book, written while she was the Guardian's design correspondent (and before her acclaimed lives of Eric Gill, William Morris, and Edward Burne-Jones.) It tells of a venturesome effort to enact an Edwardian Utopia in a small town in the Cotswolds.

The leader of this endeavour was progressive-minded architect Charles Robert Ashbee, who in 1888 founded the Guild of Handicraft in Whitechapel, specialising in metalworking, jewellery and furniture and informed by the desire to improve society. In 1902 Ashbee and his East London comrades removed the Guild to Chipping Campden in Gloucestershire, hoping to construct a socialistic rural idyll. MacCarthy explores the impact of the experiment on the lives of the group and on the little town they occupied - tracing the Guild's fortunes and misfortunes, hilarious and grave, and the many fellow idealists and artists who were involved (among them William Morris, Roger Fry, and Sidney and Beatrice Webb.)

» Have you read this book? We'd like to know what you think about it - write a review about Simple Life book by Fiona MacCarthy and you'll earn 50c in Boomerang Bucks loyalty dollars (you must be a Boomerang Books Account Holder - it's free to sign up and there are great benefits!)

A well-known broadcaster and critic, Fiona MacCarthy established herself as one of the leading writers of biography in Britain with her widely acclaimed book Eric Gill, published in 1989. Her biography of Byron was described by A. N. Wilson as 'a flawless triumph' and William Morris won the Wolfson History Prize and the Writers' Guild Non-Fiction Award. She most recently published Last Curtsey, a memoir of her early life as a debutante. Fiona is a Senior Fellow of the Royal College of Art, a Fellow of the Royal Society of Literature and an Hon. Fellow of Lady Margaret Hall, Oxford. She was awarded the OBE for services to literature in 2009.