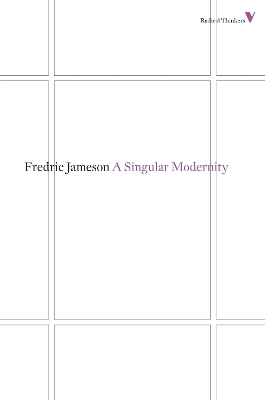 Essay on the Ontology of the Present

The concepts of modernity and modernism are amongst the most controversial and vigorously debated in contemporary philosophy and cultural theory. In this intervention, Fredric Jameson--perhaps the most influential and persuasive theorist of postmodernity--excavates and explores these notions in a fresh and illuminating manner.

The extraordinary revival of discussions of modernity, as well as of new theories of artistic modernism, demands attention in its own right. It seems clear that the (provisional) disappearance of alternatives to capitalism plays its part in the universal attempt to revive 'modernity' as a social ideal. Yet the paradoxes of the concept illustrate its legitimate history and suggest some rules for avoiding its misuse as well.

In this major interpretation of the problematic, Jameson concludes that both concepts are tainted, but nonetheless yield clues as to the nature of the phenomena they purported to theorize. His judicious and vigilant probing of both terms--which can probably not be banished at this late date--helps us clarify our present political and artistic situations.

» Have you read this book? We'd like to know what you think about it - write a review about Singular Modernity book by Fredric Jameson and you'll earn 50c in Boomerang Bucks loyalty dollars (you must be a Boomerang Books Account Holder - it's free to sign up and there are great benefits!)

Fredric Jameson is Distinguished Professor of Comparative Literature at Duke University. The author of numerous books, he has over the last three decades developed a richly nuanced vision of Western culture's relation to political economy. He was a recipient of the 2008 Holberg International Memorial Prize. He is the author of many books, including Postmodernism, Or, The Cultural Logic of Late Capitalism, The Cultural Turn, A Singular Modernity, The Modernist Papers, Archaeologies of the Future, Brecht and Method, Ideologies of Theory, Valences of the Dialectic, The Hegel Variations and Representing Capital.

A Preview for this title is currently not available.
More Books By Fredric Jameson
View All