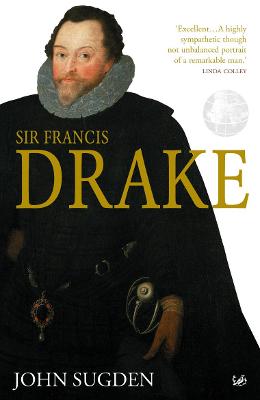 More than four hundred years after his death, Sir Francis Drake remains one of the legendary figures of history. His career is one of the most colourful on record. The most daring of the corsairs who raided the West Indies and Spanish Main, he led the English into the Pacific, and circumnavigated the world to bring home the Golden Hind laden with Spanish treasure. His attacks on Spanish cities and ships transformed his private war into a struggle for survival between Protestant England and Catholic Spain, in which he became Elizabeth I's most prominent admiral. His exploits marked the emergence of England as a major maritime nation.

» Have you read this book? We'd like to know what you think about it - write a review about Sir Francis Drake book by Dr John Sugden and you'll earn 50c in Boomerang Bucks loyalty dollars (you must be a Boomerang Books Account Holder - it's free to sign up and there are great benefits!)

The recipient of numerous awards, John Sugden has degrees from three British universities and was formerly a lecturer and senior research fellow. He has pursued historical research in archives throughout Britain and North America and his books and many articles have been published to great acclaim. His most recent book is Nelson- A Dream of Glory, published by Cape in September 2004.

A Preview for this title is currently not available.
More Books By Dr John Sugden
View All