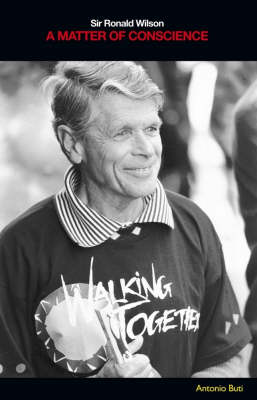 A Matter of Conscience

Orphaned as a child and brought up by a housekeeper, Sir Ronald left school at fourteen to earn a living as a messenger in the local Geraldton courthouse before subsequently enjoying a meteoric rise in the legal profession to become a Justice in the highest court in Australia. Best known for Bringing Them Home (his moving and controversial 1997 report on the 'Stolen Generations' of Aboriginal children), Sir Ronald was also Crown Prosecutor in a number of high profile, important criminal and civil cases, including the trials of Eric Cooke (the last man hanged in Western Australia), John Button and Darryl Beamish.

» Have you read this book? We'd like to know what you think about it - write a review about Sir Ronald Wilson book by Antonio Buti and you'll earn 50c in Boomerang Bucks loyalty dollars (you must be a Boomerang Books Account Holder - it's free to sign up and there are great benefits!)

Dr Antonio (Tony) Buti is a graduate of The University of Western Australia (B.P.E. (Hons) 1982, Dip. Ed 1983, M.I.R. 1996), the Australian National University (LL.B (Hons) 1992) and Oxford University (D.Phil 2003). His doctoral thesis was on guardianship law and the removal of Aboriginal children from their families. Dr Buti lectures in law at The University of Western Australia and is currently completing a doctorate in law from Yale University. Dr Buti has written books, articles and other publications on the removal of Aboriginal children from their families, British child migrants, guardianship law, drug testing in sport and sports law in general. A three-time competitor in the Concours International de Plaidoires in Caen, France, Dr Buti has also co-produced and co-directed a documentary on racial vilification in sport.

A Preview for this title is currently not available.
More Books By Antonio Buti
View All