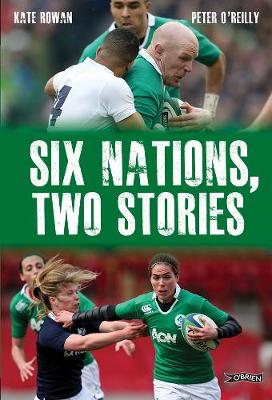 Relive, game by game, the key moments in Ireland's historic 2015 Six Nations campaign, which culminated in a nerve-shredding final weekend when both the women's and men's titles were still up for grabs.

Through interviews with players like Sean O'Brien, Niamh Briggs, Nora Stapleton and Robbie Henshaw - as well as members of the backroom staff - journalists Kate Rowan and Peter O'Reilly provide a unique glimpse into the mindset of the two camps. Kate looks at recent advances in the Irish women's game, while Peter outlines the transformation in the men's fortunes under Joe Schmidt, `the best coach in the world'. They highlight the contrasts between the amateur women's and professional men's set-ups and the lifestyles of the players on each team.

Six Nations, Two Stories offers unrivalled depth of coverage of a breakthrough Six Nations season: the first time that Ireland won both senior tournaments in one year, renewing optimism in the future of Irish rugby.

» Have you read this book? We'd like to know what you think about it - write a review about Six Nations, Two Stories book by Peter O'Reilly and you'll earn 50c in Boomerang Bucks loyalty dollars (you must be a Boomerang Books Account Holder - it's free to sign up and there are great benefits!)

Peter O'Reilly is the rugby correspondent with the Sunday Times. He has been reporting on rugby since 1995. Kate Rowan is a freelance sports journalist based in Dublin, specialising in features. Kate has travelled widely covering rugby including the 2011 Rugby World Cup in New Zealand, Ireland's 2012 June to tour to New Zealand and the 2013 British and Irish Lions Tour of Australia. She regularly wrote features for the Irish Independent online and has worked extensively writing for governing bodies including World Rugby (formerly IRB) and IRFU. She has also covered women's rugby extensively from club to international level, including Ireland's Women's 2015 Six Nations winning campaign.

A Preview for this title is currently not available.
More Books By Peter O'Reilly
View All