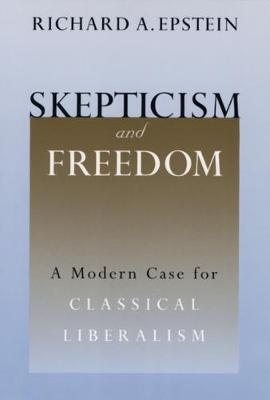 A Modern Case for Classical Liberalism

Description - Skepticism and Freedom by Richard A. Epstein

With this book, Richard A. Epstein provides a spirited and systematic defense of classical liberalism against the critiques mounted against it over the past thirty years. One of the most distinguished and provocative legal scholars writing today, Epstein here explains his controversial ideas in what will quickly come to be considered one of his cornerstone works.

He begins by laying out his own vision of the key principles of classical liberalism: respect for the autonomy of the individual, a strong system of private property rights, the voluntary exchange of labor and possessions, and prohibitions against force or fraud. Nonetheless, he not only recognizes but insists that state coercion is crucial to safeguarding these principles of private ordering and supplying the social infrastructure on which they depend. Within this framework, Epstein then shows why limited government is much to be preferred over the modern interventionist welfare state.

Many of the modern attacks on the classical liberal system seek to undermine the moral, conceptual, cognitive, and psychological foundations on which it rests. Epstein rises to this challenge by carefully rebutting each of these objections in turn. For instance, Epstein demonstrates how our inability to judge the preferences of others means we should respect their liberty of choice regarding their own lives. And he points out the flaws in behavioral economic arguments which, overlooking strong evolutionary pressures, claim that individual preferences are unstable and that people are unable to adopt rational means to achieve their own ends. Freedom, Epstein ultimately shows, depends upon a skepticism that rightly shuns making judgments about what is best for individuals, but that also avoids the relativistic trap that all judgments about our political institutions have equal worth.

A brilliant defense of classical liberalism, Skepticism and Freedom will rightly be seen as an intellectual landmark.


Other Editions - Skepticism and Freedom by Richard A. Epstein 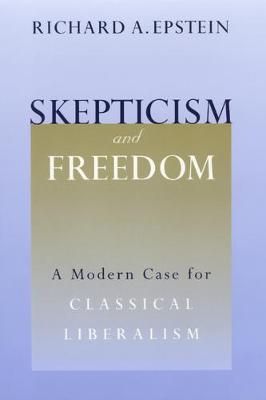 Book Reviews - Skepticism and Freedom by Richard A. Epstein

» Have you read this book? We'd like to know what you think about it - write a review about Skepticism and Freedom book by Richard A. Epstein and you'll earn 50c in Boomerang Bucks loyalty dollars (you must be a Boomerang Books Account Holder - it's free to sign up and there are great benefits!)

Richard A. Epstein is the James Parker Hall Distinguished Service Professor of Law at the University of Chicago Law School and the Peter and Kirsten Bedford Senior Fellow at the Hoover Institution. He is the author of a number of books, including "Simple Rules for a Complex World" and" Principles for a Free Society," and coeditor of "The Vote: Bush, Gore, and the Supreme Court," published by the University of Chicago Press.

A Preview for this title is currently not available.
More Books By Richard A. Epstein
View All

Constitutional Protection of Private Property and Freedom of Contract
$353.43 $357.00