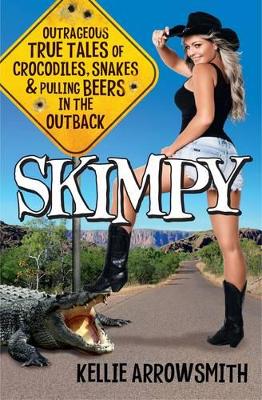 Outrageous true tales of crocodiles, snakes and pulling beers in the Outback

Kellie Arrowsmith was a country girl whose idea of a hairdo was tying a ponytail whenever she wanted to go horse riding. But in her early twenties she left her sleepy hometown of Albury on the NSW/Victoria border for the bright lights of the Gold Coast, and soon found herself working in a succession of unexciting jobs just to keep up with her now-glamorous lifestyle. After spending two years as a frazzled receptionist for an adult entertainment agency, Kellie decided to stop booking the jobs and start taking them. So it was that she found herself travelling to Gove, a mining town in East Arnhem Land, where she had her first stint as a skimpy: a barmaid who wears not much clothing for big money. Skimpies can work in the NT, in WA, in the Hunter Valley of NSW - wherever there's a bunch of blokes with a fly-in fly-out lifestyle who enjoy a cold beer at the end of their shift. Kellie thought her new job would take her all round the country, but she hadn't planned on falling in love - not with Dave, a rough-and-tumble outback character with a big heart and the world's worst four-wheel-drive, and not with the Northern Territory way of life. But she did, and instead of diamonds and dust, Kellie got crocodiles and denim cut-offs - and a whole lot of stories to tell about a side of outback life that's a long way off the beaten track.

» Have you read this book? We'd like to know what you think about it - write a review about Skimpy book by Kellie Arrowsmith and you'll earn 50c in Boomerang Bucks loyalty dollars (you must be a Boomerang Books Account Holder - it's free to sign up and there are great benefits!)

After growing up in regional New South Wales, Kellie Arrowsmith moved to the Gold Coast, where she spent several years before working a stint as a skimpy barmaid in Gove, Arnhem Land, NT. Fascinated by the Top End and the people she met there, Kellie soon left the Gold Coast for Gove, then Darwin, and in between made a couple of road trips down through the middle of Australia, accompanied only by Chaos, her faithful pit bull. She has worked as a skimpy in Broome and Kalgoorlie, as well as doing some quite different work for Darwin's Hot 100 FM. Before leaving the Territory for New South Wales, Kellie collected hilarious - and often outrageous - stories of crocodiles, snakes and incredible NT characters. Kellie now lives near Newcastle, NSW, with her daughter.