A fine novel from Witi Ihimaera in which a great story about a feisty teenager is interwoven with a dazzling trip through Maori mythology.
Stroppy teenager Skylark O'Shea is on holiday with her mother at a town on the coast. But all is not what it seems. What is the threat facing the town and the birds of the forest? Where do the two old charismatic Maori women Hoki and Bella fit in? Skylark becomes embroiled in a prophecy that much to her dismay involves her in an extraordinary journey. Soon she is pitting her wits in a race of breathtaking dimension, a dazzling trip through Maori mythology.
This novel by Witi Ihimaera is fascinating and unique. At one level it is a romp and a rollercoaster ride that sometimes reminds you of Lord of the Rings. At other levels it is a brilliant accomplishment of combining this with new ways of exploring Maori myth.
Also available as an eBook 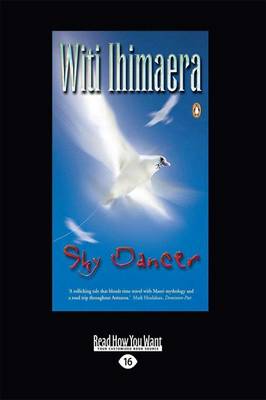 » Have you read this book? We'd like to know what you think about it - write a review about Sky Dancer book by Witi Ihimaera and you'll earn 50c in Boomerang Bucks loyalty dollars (you must be a Boomerang Books Account Holder - it's free to sign up and there are great benefits!)

Witi Ihimaera was the first Maori to publish both a book of short stories and a novel, and since then has published many notable novels and collections of short stories. Described by Metro magazine as 'Part oracle, part memoralist,' and 'an inspired voice, weaving many stories together', Ihimaera has also written for stage and screen, edited books on the arts and culture, as well as published various works for children. His best-known novel is The Whale Rider, which was made into a hugely, internationally successful film in 2002. His novel Nights in the Garden of Spain was also made into a feature film, and was distributed internationally under the name of Kawa. The feature film White Lies was based on his novella Medicine Woman. And his novel Bulibasha, King of the Gypsies inspired the 2016 feature film Mahana. His first book, Pounamu, Pounamu, has not been out of print in the 40 years since publication. He has also had careers in diplomacy, teaching, theatre, opera, film and television. In 1993 Ihimaera spent a year in France on the Katherine Mansfield Fellowship. He has received numerous awards, including the Wattie Book of the Year Award and the Montana Book Award, the inaugural Star of Oceania Award, University of Hawaii 2009, a laureate award from the New Zealand Arts Foundation 2009, the