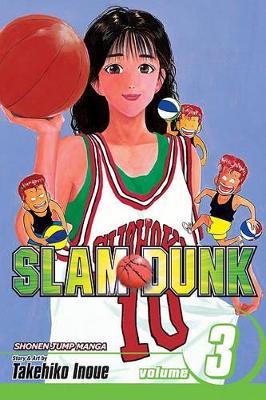 The best-selling series from Eisner-nominated Takehiko Inoue, one of Japan's greatest manga creators.

Winning isn't everything in the game of basketball, but who wants to come in second? It takes dedication and discipline to be the best, and the Shohoku High hoops team wants to be just that. They have one last year to make their captain's dream of reaching the finals come true-will they do it?

For a self-proclaimed genius such as Sakuragi, executing a dazzling slam dunk is no problem at all, but what about some other basketball moves that require a bit more finesse? With the help of Haruka (and some goading from captain Akagi), Sakuragi attempts to put his pride in check and learn how to pull off a basic layup. In theory it should be easy...but sometimes the simplest shots are the toughest to master.

» Have you read this book? We'd like to know what you think about it - write a review about Slam Dunk, Vol. 3 book by Takehiko Inoue and you'll earn 50c in Boomerang Bucks loyalty dollars (you must be a Boomerang Books Account Holder - it's free to sign up and there are great benefits!)

Takehiko Inoue is the creator of one of the most popular manga of all time, Slam Dunk, which has sold over 100 million copies worldwide. He followed that series up with two titles lauded by critics and fans alike--Vagabond, a fictional account of the life of Miyamoto Musashi, and Real, a manga about wheelchair basketball. Inoue is the recipient of numerous awards, including the prestigious Tezuka Osamu Culture award and the Media Arts Festival Award. In addition to his work on manga, Inoue has worked on television commercials, character designs for video games, and is the founder of a scholarship to foster Japanese basketball talent.

A Preview for this title is currently not available.
More Books By Takehiko Inoue
View All