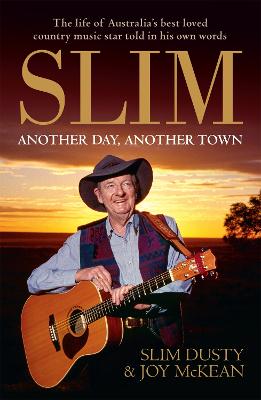 Slim: Another Day, Another Town

Description - Slim: Another Day, Another Town by Slim Dusty

'It seems I've done most things I wanted to do, but of all things, I think I most enjoy finding good songs and recording them. There are so many songs I want to record that I will be kept busy for as long as I can keep it up ... It is the people you meet along the road of life who make the travelling easier. No wonder I loved it all.' - Slim DustySlim Dusty was Australia's most well-loved and best known country music performer. A legend in the bush, his famous hit 'A Pub With No Beer' made him a household name in the towns and cities too. This is the story of the life that Slim Dusty and Joy McKean shared for their fifty years of marriage and touring together - their love for each other, their family and their music - and their determination to bring country music to the whole of Australia. Slim died in 2003, but throughout Australia, and around the world, people are still playing his songs and passing them on to new generations of fans. In this updated edition of the classic autobiography, Joy McKean writes about her family's commitment to honouring his memory and their work to keep his name alive. If you love today's Australian country music, this is the story of where it all started. '... just like his lyrics, the prose is perfect. Here he is talking about the early Dusty days. It's just like listening to a bright spark in the bush.' - The Age'Slim blazed the red-dirt trail for Australian singer/songwriters, allowing us to remain unashamedly ourselves.' - Missy Higgins

Book Reviews - Slim: Another Day, Another Town by Slim Dusty

» Have you read this book? We'd like to know what you think about it - write a review about Slim: Another Day, Another Town book by Slim Dusty and you'll earn 50c in Boomerang Bucks loyalty dollars (you must be a Boomerang Books Account Holder - it's free to sign up and there are great benefits!)

Slim Dusty (Author) Slim Dusty was one of Australia's most prolific recording artists, releasing over 100 albums since his first commercial recording in 1946, and record sales of over seven million. Slim was awarded an MBE in 1970 and an OA in 1998 and was the first Australian to have an international hit record. Until his death in 2003, he held more gold and platinum record awards than any other Australian artist. Joy McKean (Author) Joy McKean became famous performing with her sister Heather in the 1950s, writing songs that have become Australian classics, and creating a lifelong partnership with Slim Dusty. She wrote many of Slim's most famous songs, was awarded six Golden Guitars and was a founder of the Tamworth Country Music Festival. She has received lifetime achievement awards from the Country Music Association of Australia and Australian Country Music Foundation, received the Songmaker Award from the Tamworth Songwriter's Association, an Australian Bush Laureate Award, and the McKean Sisters were inducted into the Country Music Broadcaster's Hall of Fame. Joy McKean shows her talent as a writer in her bestselling books Another Day, Another Town, the biography of Slim Dusty, I've Been There...And Back Again, and, most recently, Riding this Road.