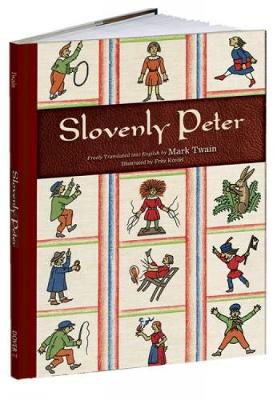 Written in 1845 by German physician Heinrich Hoffmann, Slovenly Peter has entertained generations of readers around the world. This marvelous hardcover edition features Mark Twain's witty translation of the hilarious rhymes that recount the disastrous consequences that befall naughty children. Hoffmann's captivating colour illustrations, adapted by Fritz Kredel from a rare limited edition, complement the comical verses. AGES: 10 and up

» Have you read this book? We'd like to know what you think about it - write a review about Slovenly Peter book by Mark Twain and you'll earn 50c in Boomerang Bucks loyalty dollars (you must be a Boomerang Books Account Holder - it's free to sign up and there are great benefits!)

Unhappy with the dry and pedagogic books available for 19th-century children, Frankfurt physician Heinrich Hoffmann wrote and illustrated Struwwelpeter, the original German-language version of Slovenly Peter, as a Christmas present for his three-year-old son. After the Civil War, Samuel Clemens (1835-1910) left his small town to seek work as a riverboat pilot. As Mark Twain, the Missouri native found his place in the world. Author, journalist, lecturer, wit, and sage, Twain created enduring works that have enlightened and amused readers of all ages for generations. German artist and graphic designer Fritz Kredel (1900-73) immigrated to the United States in the 1930s, where he taught at New York's Cooper Union. Kredel illustrated more than 400 books in English and German, including a six-volume limited-edition collection of the works of Hans Christian Andersen. In 1960 he was commissioned to create a woodcut of the presidential seal for John F. Kennedy's inauguration.