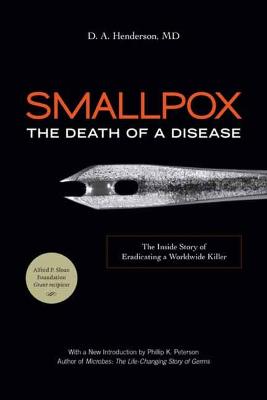 Smallpox: The Death of a Disease: The Inside Story of Eradicating a Worldwide Killer

Description - Smallpox: The Death of a Disease: The Inside Story of Eradicating a Worldwide Killer by D. A., M.D. Henderson

With a New Introduction by Phillip K. Peterson, M.D., author of Microbes: The Life-Changing Story of Germs

For more than 3000 years, hundreds of millions of people have died or been left permanently scarred or blind by the

relentless, incurable disease called smallpox. In 1967, Dr. D.A. Henderson became director of a worldwide campaign to eliminate this disease from the face of the earth. This spellbinding book is Dr. Henderson's personal story of how he led the World Health Organization's campaign to eradicate smallpox-the only disease in history to have been deliberately eliminated. Some have called this feat "the greatest scientific and humanitarian achievement of the past century." This latest edition features a new introduction by Phillip K. Peterson, M.D., in which the infectious diseases expert contends that Dr. Henderson's campaign against smallpox may provide insights towards the fight against COVID-19 and future global pandemics. In a lively, engrossing narrative, Dr. Henderson makes it clear that the gargantuan international effort involved more than straightforward mass vaccination. He and his staff had to cope with civil wars, floods, impassable roads, and refugees as well as formidable bureaucratic and cultural obstacles, shortages of local health personnel and meager budgets. Countries across the world joined in the effort; the United States and the Soviet Union worked together through the darkest cold war days; and professionals from more than 70 nations served as WHO field staff. On October 26, 1976, the last case of smallpox occurred. The disease that annually had killed two million people or more had been vanquished-and in just over ten years. The story did not end there. Dr. Henderson recounts in vivid detail the continuing struggle over whether to destroy the remaining virus in the two laboratories still that held it. Then came the startling discovery that the Soviet Union had been experimenting with smallpox virus as a biological weapon and producing it in large quantities. The threat of its possible use by a rogue nation or a terrorist has had to be taken seriously and Dr. Henderson has been a central figure in plans for coping with it. New methods for mass smallpox vaccination were so successful that he sought to expand the program of smallpox immunization to include polio, measles, whooping cough, diphtheria, and tetanus vaccines. That program now reaches more than four out of five children in the world and is eradicating poliomyelitis. This unique book is to be treasured-a personal and true story that proves that through cooperation and perseverance the most daunting of obstacles can be overcome.

Buy Smallpox: The Death of a Disease: The Inside Story of Eradicating a Worldwide Killer by D. A., M.D. Henderson from Australia's Online Independent Bookstore, Boomerang Books.

Other Editions - Smallpox: The Death of a Disease: The Inside Story of Eradicating a Worldwide Killer by D. A., M.D. Henderson 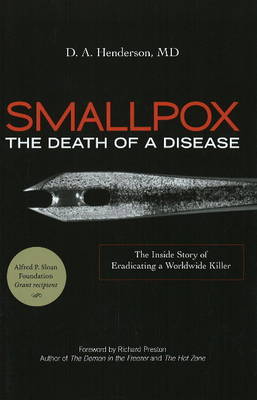 Book Reviews - Smallpox: The Death of a Disease: The Inside Story of Eradicating a Worldwide Killer by D. A., M.D. Henderson

» Have you read this book? We'd like to know what you think about it - write a review about Smallpox: The Death of a Disease: The Inside Story of Eradicating a Worldwide Killer book by D. A., M.D. Henderson and you'll earn 50c in Boomerang Bucks loyalty dollars (you must be a Boomerang Books Account Holder - it's free to sign up and there are great benefits!)


A Preview for this title is currently not available.
More Books By D. A., M.D. Henderson
View All