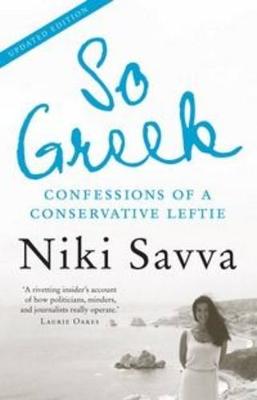 So Greek: Confessions Of A Conservative Leftie

Description - So Greek: Confessions Of A Conservative Leftie by Niki Savva

From one of the most senior correspondents in the Canberra Press Gallery comes a rare account of life as a political insider.

Born in a small village in Cyprus, Niki Savva spent her childhood in Melbourne's working-class suburbs -- frontiers where locals were suspicious of olive oil, and Greek kids spoke Gringlish to their parents.

Only a few decades later, despite all the challenges of being a migrant woman in Australia, Savva had risen through the ranks of political journalism at The Australian, and had gone on to head the Canberra bureaus of both the Melbourne Herald Sun and The Age.

Then in 1997, family tragedy struck, and she was forced to reassess her career. In spite of her own Labor convictions, she became Liberal treasurer Peter Costello's press secretary, a role that she kept for six years before moving on to join John Howard's staff.

This is one of the few books about Australian political life written by an insider with decades of exposure to its major players. Hilarious, moving, and endlessly fascinating, Savva's is a story that moves between countries, cultures, careers and, ultimately, political convictions.

Book Reviews - So Greek: Confessions Of A Conservative Leftie by Niki Savva

» Have you read this book? We'd like to know what you think about it - write a review about So Greek: Confessions Of A Conservative Leftie book by Niki Savva and you'll earn 50c in Boomerang Bucks loyalty dollars (you must be a Boomerang Books Account Holder - it's free to sign up and there are great benefits!)

Niki Savva was one of the most senior correspondents in the Canberra Press Gallery. She was twice political correspondent on The Australian, and headed up the Canberra bureaus of both the Herald Sun and the Age. When family tragedy forced a career change, she became Peter Costello's press secretary for six years and was then on John Howard's staff for three. Her work brought her into intimate contact with the major political players of the last 30 years. She is now a regular columnist for the Australian and the ABC website The Drum.

Road to Ruin: How Tony Abbott and Peta Credlin Destroyed their own Government
$21.24 $24.99