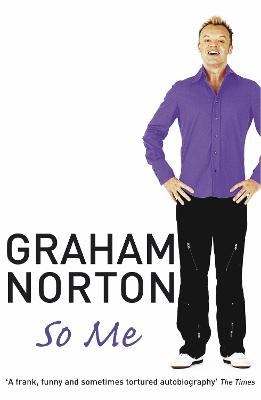 Description - So Me by Graham Norton

Graham Norton, whose impish charm and quick wit has earned him a place in our hearts, looks back at his life so far. In his own words, SO ME is 'a real romp through a journey from living in a cockroach-infested council flat in Hackney to buying Claudia Schiffer's townhouse in Manhattan, from my mother dragging me to school to me dragging her to Sharon Stone's house for New Year's brunch'.From a not-so miserable Irish childhood to dropping out of Cork University and joining a commune of hippies in San Francisco, from his disastrous attempts at becoming a serious actor to the rise of his comedy career in London, this is a hilarious, insightful and moving account of a colourful life.

Buy So Me by Graham Norton from Australia's Online Independent Bookstore, Boomerang Books.

Book Reviews - So Me by Graham Norton

» Have you read this book? We'd like to know what you think about it - write a review about So Me book by Graham Norton and you'll earn 50c in Boomerang Bucks loyalty dollars (you must be a Boomerang Books Account Holder - it's free to sign up and there are great benefits!)

Born in 1963, Graham Norton was brought up in County Cork, Ireland. He first ventured into the world of comedy in the early 90s, and was nominated for the prized Perrier award in 1997, when he also appeared as Father Noel Furlong (the happiest, clappiest, campest priest) in 'Father Ted'. He then got his first TV break on Channel 5's 'Bring Me the Head of Light Entertainment'. In May 2000, he received the Bafta award for Best Entertainment performance for 'So Graham Norton'. His most recent chat show, 'V Graham Norton' was on 5 times a week with 3 million viewers a night. He is due to present a dance competition show in 2005 on BBC1.

A Preview for this title is currently not available.
More Books By Graham Norton
View All