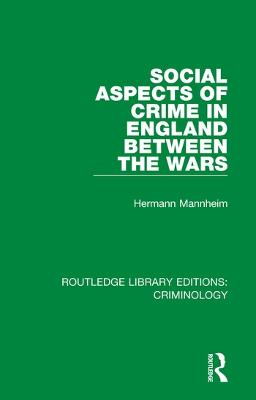 Social Aspects of Crime in England between the Wars

Originally published in 1940. This ground-breaking work formed the foundation for modern criminology becoming an academic discipline within UK sociological studies. It concerns the history of crime, its causes and treatment in England during the preceding twenty-five years or so. Mannheim, through this and later studies, went on to found the criminology department at LSE.

The book offers an evaluation of the criminological implications of the War and early post-War period as well as an examination of the practical working of the new penal machinery built up by the Reform Acts passed just prior to the War. The author produced a scientific account of the post-War state of crime, beginning with a critical examination of the structure and interpretation of English Criminal Statistics followed by a survey of the principal criminological features of the period between the two Wars. Significant aspects are dealt with in a separate chapters - four devoted to problems of work and leisure (Unemployment and Strikes, Business Administration, Alcoholism, and Gambling), four others to those of certain specific sections of the population (Juvenile Delinquency, Female Delinquency and Prostitution, Recidivism).

This is a fascinating read for both the historian and the criminologist.

Buy Social Aspects of Crime in England between the Wars by Hermann Mannheim from Australia's Online Independent Bookstore, Boomerang Books. 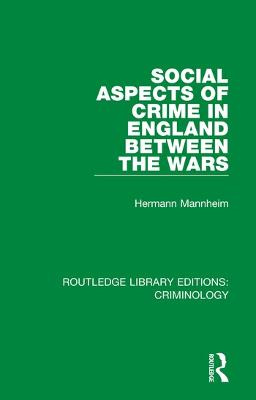 » Have you read this book? We'd like to know what you think about it - write a review about Social Aspects of Crime in England between the Wars book by Hermann Mannheim and you'll earn 50c in Boomerang Bucks loyalty dollars (you must be a Boomerang Books Account Holder - it's free to sign up and there are great benefits!)


A Preview for this title is currently not available.
More Books By Hermann Mannheim
View All