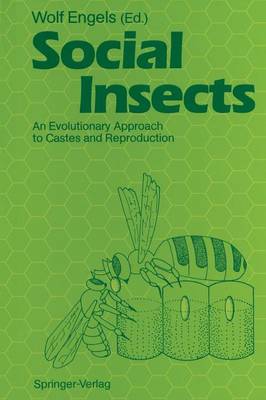 An Evolutionary Approach to Castes and Reproduction Softcover reprint of the original 1st ed. 1990

Description - Social Insects by A. Buschinger

Evolution of Castes in Insects l BERNHARD RENSCH The evolution of organisms in the succession of generations has been primarilly achieved through the appearance of new hereditary variants with minor deviations along with the development of stable structures and functions. Harmful mutants were eradicated either immediately or in the subsequent generations through the process of natural selection while unharmful or advantageous ones usually survived. As this process continued, many new races and species developed which possessed structures and functions of a rational nature and which became increasingly independent from their environment. These evolutionary tendencies were also promoted through either geographical, ecological, physiological or genetical isolation of populations. In some phylogenetic lines, there occurred an increase in the number of cells due to additional cellular divisions in the morphogenesis of structures. This opened up the possibility for the development of the division of labour within cellular groups leading to more complicated and consequently more successful functions of tissues and organs. A further advancement in the adaptation of a species to its environment was made possible through specialization for certain functions of whole individuals or groups of individuals.

Other Editions - Social Insects by A. Buschinger » Have you read this book? We'd like to know what you think about it - write a review about Social Insects book by A. Buschinger and you'll earn 50c in Boomerang Bucks loyalty dollars (you must be a Boomerang Books Account Holder - it's free to sign up and there are great benefits!)


A Preview for this title is currently not available.
More Books By A. Buschinger
View All