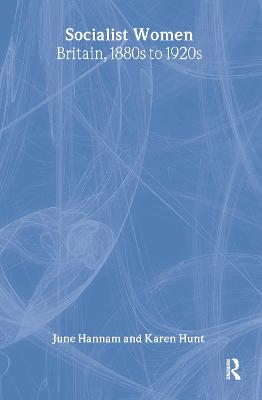 This fascinating new study examines the experiences of women involved in the socialist movement during its formative years in Britain and the active role they played in campaigning for the vote. By giving full attention to this much-neglected group of women, Socialist Women examines and challenges the orthodox views of labour and suffrage history. Torn between competing loyalties of gender, class and politics, socialist women did not have a fixed identity but a number of contested identities. June Hannam and Karen Hunt probe issues that created divisions between these women, as well as giving them the opportunity to act together. In three fascinating case studies they explore: * women's suffrage * women and internationalism * the politics of consumption Believing above all that being a woman was vital to their politics, these individuals sought to develop a woman-focused theory of socialism and to put this new politics into practice. Socialist Women explores what it meant to be a socialist woman against the backdrop of enormous political and social upheaval caused by the First World War and the growth of the women's suffrage movement.
The viewpoint of these women brings a new perspective to both socialist and feminist politics, which will make absorbing reading for anyone interested in gender history or the politics of this period. » Have you read this book? We'd like to know what you think about it - write a review about Socialist Women book by June Hannam and you'll earn 50c in Boomerang Bucks loyalty dollars (you must be a Boomerang Books Account Holder - it's free to sign up and there are great benefits!)


A Preview for this title is currently not available.
More Books By June Hannam
View All